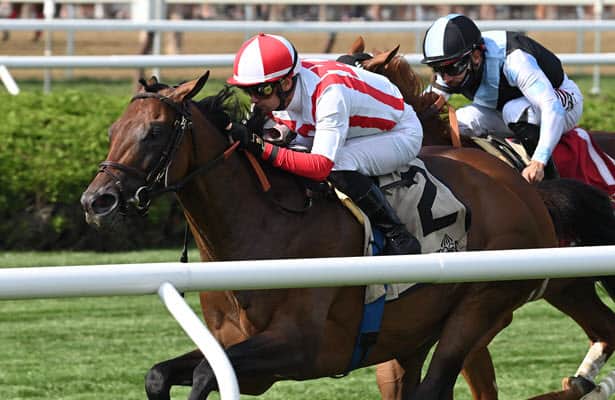 Public Sector, sent to post as the 4-5 favorite in the seven-horse field of sophomores, rallied up the rail to win the 37th running of Friday’s Grade 2, $200,000 National Museum of Racing Hall of Fame at Saratoga Race Course.

Owned by Klaravich Stables and trained by Chad Brown – who teamed again with Digital Software in the nightcap that netted Brown his 2,000th career win – Public Sector was rated kindly by Flavien Prat behind Next’s honest fractions of 23.91, 47.56, and 1:11.36 on the firm inner turf.

When a seam opened along the inside past the sixteenth pole, Public Sector powered home to cover the one-mile distance in a 1:35.03 final time.

“Our plan was to leave out of there with intention,” Brown said. “It looked like there was a lot of speed on paper but make them go, get our spot and if they're going to go, go. If not, we'll be there. As it turned out, they actually weren't going. The 47 and 3 [half-mile] is solid but it's been dry here and in a graded race at Saratoga, that's not that fast for these horses.

"Flavien does many things wonderfully and that was one of them," Brown continued. "He gives you a chance to win by adapting to the pace right away. If you give him the right horse, he's going to deliver for you."

Prat made his third start aboard Public Sector following an optional-claiming win in June and a runner-up effort to Hall of Fame rival Original last out in the Manila on July 4, both at Belmont.

Annex, who settled in fifth position early under Junior Alvarado, rallied wide into the lane angling in slightly at the three-sixteenths in front of Original, who clipped heels amongst a crowd of rivals and was pulled up by his rider, Luis Saez.

Annex re-rallied to complete the exacta, a length behind, and In Effect, the longest shot in the field at 30-1, was another 1 ¾ lengths back in third.

Next, Easy Time, and Wolfie’s Dynaghost completed the order of finish. Original walked off the course under his own power.

Following a stewards’ inquiry into the stretch run, no change was made to the order of finish.

Public Sector, a son of Kingman bred in Great Britain, returned $3.80. He improved his record to 3-3-0 in six outings and upped his bankroll to $278,600 for owner Seth Klarman.

"We've become very close friends and he's such a loyal supporter of our stable and he provides us with these wonderful horses like you saw today with Public Sector," Brown said of Klarman. "He's a real sportsman and always does the right thing by the horse and he gets rewarded because of that."

Brown also expressed his appreciation for his hard-working team after reaching the 2,000 win milestone in Friday's 10th race.

“I'm running the ship and calling the shots, but I can't do it without all my wonderful co-workers, all the great horses and all the people that taught you along the way," Brown said. "There are so many things that go into it. I play one role - it's an important role - but far from the only role. It's a great thing to experience and hopefully it will sink in and my team can really appreciate it and move forward to try and get the next goal.”