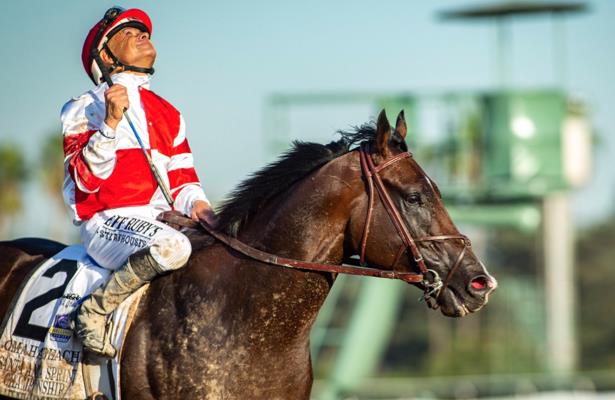 But connections have plans to run beyond a Nov. 2 championship event — be it in the Sprint, Dirt Mile or Classic — and Fox Hill Farm is spreading the word.

While Omaha Beach is under contract to stand at stud in 2020 at Spendthrift Farm, terms dictate that the Richard Mandella-trained son of War Front can run through the Pegasus World Cup (G1) on Jan. 25 at Gulfstream Park.

“Some people were talking about, ‘We don’t even want to pull for him. This is his last race,’” Keith said. “Well, we sure hope it’s not his last race.”

Another start is planned between the Breeders’ Cup and Pegasus.

Speculation about Omaha Beach’s future, both immediate and longterm, heightened after an especially impressive return win in the Oct. 5 Santa Anita Sprint Championship (G1). It marked the colt’s first race since the Arkansas Derby (G1) and followed throat surgery to repair a breathing issue that last spring counted Omaha Beach out of the Kentucky Derby.

Porter said Omaha Beach is scheduled for his first work back from the Sprint Championship on Wednesday at Santa Anita Park, where jockey Mike Smith will be in the irons for an easy half-mile breeze.

While Porter and Mandella usually negotiate race spots, a decision of which Breeders’ Cup race Omaha Beach tries will be totally up to the trainer.

“He’s watching him train every day, and I told him I did not want to have any input in it,” Porter said. “Everything he’s said so far has been the Sprint.

“I’m sure the Classic is out. We can’t go a mile and a quarter now; he hasn’t even mentioned that. He could go to the (Dirt) Mile, but I’m almost positive he’s going with the Sprint.

Contact between Porter and Spendthrift Farm has been limited to mutual congratulations since the comeback victory, though Porter said he’s open to conversations of running his star horse beyond the Pegasus.

“If they wanted to keep racing him, I’d be glad to,” he said. “We’d have to amend the contract and everything.”

In the Sprint, Omaha Beach would go the same six-furlong trip at which he just won. Mitole, the likely Eclipse Award winner, figures to go as the race favorite.

Omaha Beach's stud fee will be determined upon retirement, according to a Spendthrift Farm news release Tuesday.