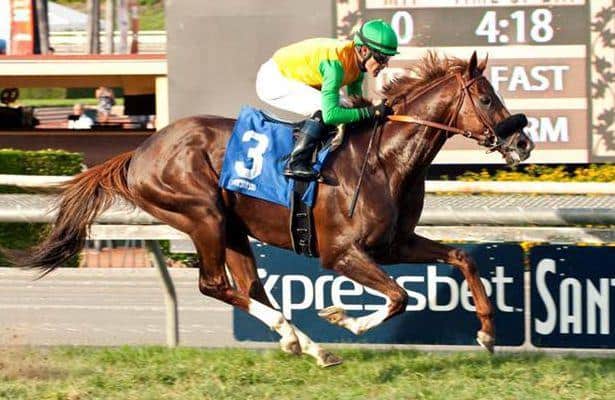 Looking for vindication after a disappointing fourth in the Grade I Hollywood Derby at Del Mar on Nov. 28th, trainer Dan Hendricks will send out his star 3-year-old Om in Santa Anita’s Opening Day, Grade II, $200,000 Mathis Brothers Mile, for 3-year-olds on the turf this Saturday.

Known early on in his career as the colt that beat Triple Crown Winner American Pharoah when they were both 2-year-olds, Om now stands on his own merits which include a win in both the Grade II Del Mar Derby going a mile and an eighth on the grass Sept. 6 and the Grade II Twilight Derby here at Santa Anita going the same distance on closing weekend of the Autumn Meet in late October.

As the 4-5 favorite going into the Hollywood Derby on Nov. 28, Om, who normally cruises to the lead, sat second to 60-1 shot Acceptance behind fractions of 23.51 and a half mile in 47.41 before taking the lead around the far turn but couldn’t hold off a pair of late runners and finished third. After the race jockey Gary Stevens noted that Om had issues in the gate but still showed a huge effort. “He threw a fit in the starting gate. We had all kinds of problems. He kicked the you-know-what out of it. He was good during the running though. He wasn't pulling. He ran his race and ran well. We just got beat."

Owned by the Sareen Family Trust, Om is by Munnings out of the Tabasco Cat mare Rare Cat and has an overall record of 9-4-1-2 with earnings of $430,500.

Ocho Ocho Ocho will return after a hiatus for trainer Jim Cassidy and will try turf for only the second time in his nine race career. He comes off a fourth in the Grade II, Penn (turf) Mile at Penn National on May 30. Owned by D.P. Racing, Ocho Ocho Ocho is 7-3-0-1 lifetime with $825,550 in earnings.