Olympico looks to do one better for Brown in Belmont's Knickerbocker 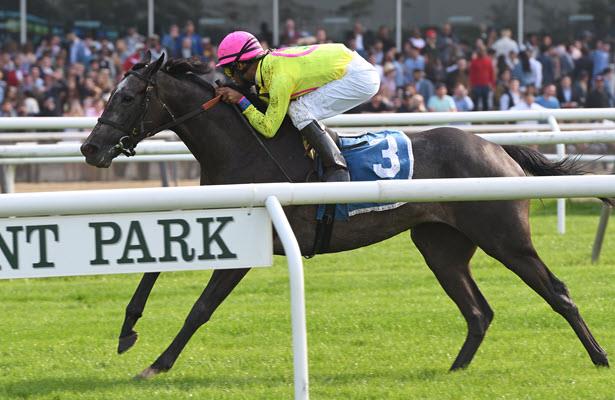 After running second in last year's edition, the Chad Brown-trained Olympico will get another chance to earn a trip to the winner's circle when he competes as part of a five-horse field in the $150,000 Knickerbocker (G2) for 3-year-olds and up going 1 1/8 miles on Belmont Park's inner turf on Sunday.

The Knickerbocker was originally scheduled for the Monday, Oct. 12 holiday card but was moved to Sunday's third race at 1:28 p.m. Eastern due to inclement weather. That provided Olympico with a few days of extra rest as he makes his first appearance since running fifth in the 1 1/16-mile Lure on September 7 at Saratoga Race Course.

Owned by Michael Dubb, Madaket Stables, Wonder Stables and Bethlehem Stables, Olympico made his 2020 debut off a nearly nine-month layoff, finishing fifth in the Bernard Baruch (G2) on July 26 at the Spa. That marked his first start since finishing just one length back to Lucullan in the 2019 Knickerbocker.

After arriving from his native France last year, the now 5-year-old son of Rajsaman won his North American debut by capturing the Fort Marcy  (G3) in May 2019 over Belmont's softer turf at the Knickerbocker distance. After six straight winless starts, he will look to recapture that form, drawing post 1 with Irad Ortiz, Jr. retaining the mount.

His stablemate, Devamani, was also bred in France and started his career there before making the cross-Atlantic trek. Since arriving in the United States in 2018, the Dubawi gelding has been competitive. With Brown taking over the training duties for his 6-year-old campaign, Devamani has finished on the board in four of his five starts, starting 2020 with back-to-back runner-up finishes in the Tampa Bay (G3) on February 8 and the Fort Marcy (G2) on June 6 at Belmont.

He ran third last out in the Lure and will return to Belmont for his eighth race at the track, drawing post 3 with Joel Rosario in the irons.

Juddmonte Farms' Seismic Wave will return to stakes company for Hall of Fame trainer Bill Mott. The 4-year-old Kentucky homebred ran second in a 1 1/8-mile race moved off the turf last out on Aug. 27 at Saratoga. Before that effort on a sloppy and sealed track, the son of Tapit had run in 11 consecutive stakes contests dating to 2019, including a win in the English Channel going one mile over the Belmont turf last October and a second-place finish in the Poker (G3) on July 4.

"I think for his style of running, a racetrack at Belmont is going to suit him better to get the trip he needs," said Garrett O'Rourke, the general manager of Juddmonte Farms. "It's a spot worthy of taking a shot in. He's a sound horse and a good servant. He's been a fun horse to have around. Horses like him are good to have around because they're reliable and usually perform really well."

Seismic Wave broke his maiden at the Knickerbocker distance on turf in his third career start in February 2019 at Gulfstream Park. A stakes win could also help his value at the upcoming sale next month, O'Rourke said. Seismic Wave is 3-4-2 in 15 career starts with earnings of $362,800.

"He's entered in the Keeneland November Sale [under the WinStar consignment], so we'll see how he runs and take it from there," O'Rourke said.

Seismic Wave will break from post 2 under Hall of Fame jockey Javier Castellano.

Phipps Stable's Breaking the Rules started his 5-year-old campaign with back-to-back wins against allowance company, besting a 10-horse field going 1 1/8 miles on June 20 at Belmont before following with a one-length score on July 29 at Saratoga Race Course.

Hall of Fame trainer Shug McGaughey moved the dark bay son of War Front back up to stakes company last out in the Lure on Sept. 7 at the Spa, where he ran fourth in his first stakes appearance since an eighth-place performance in the Poker (G3) in June 2019.

Breaking the Rules did not start again after the Poker for 12 months but has registered Beyer Speed Figures of 90 or greater in all three starts back, including a personal-best 101 for his July victory.

Hall of Famer John Velazquez, aboard for his two wins this year, will return to ride from post 5.

Waterford Stable's En Wye Cee has only one previous stakes race out of his six total starts to his credit - fourth in the Discovery (G3) last November at the Big A - but enters the challenge with momentum following a six-length win against optional claimers in a race taken over the turf on Aug. 29 at Saratoga. The Todd Pletcher trainee's only previous start on grass was a third in a blanket finish on Aug. 1 at the Spa, finishing a neck behind King Cause. After earning a 93 Beyer, Pletcher will try the 4-year-old Declaration of War colt on turf again, retaining the services of jockey Jose Ortiz from post 4.

*Rating is based on HRN fan votes, which rank the Top Active Horses in training.
Olympico Belmont Park Knickerbocker Knickerbocker (2020)