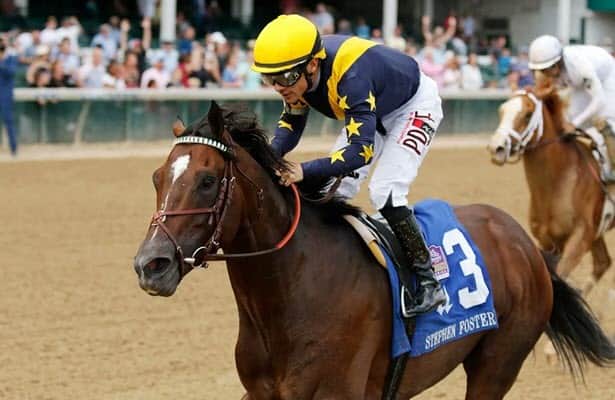 After his convincing win in Saturday’s Stephen Foster Stakes (G2) at Churchill Downs, Olympiad has risen from seventh place to third in the latest Breeders’ Cup Classic rankings, a weekly rating of the top 10 horses in contention for the Breeders’ Cup Classic (G1) at Keeneland Race Course in Lexington, Ky., on Nov. 5.

Undefeated 4-year-old Flightline remains at No. 1 in the rankings with 260 votes, which includes 21 first-place votes. Four-year-old Life Is Good, a 6-length winner in Saturday’s seven-furlong John A. Nerud Stakes (G2) at Belmont Park, improved from third to second place in the poll, with 201 votes.

Olympiad, a 4-year-old son of Speightstown, is now five for five this year. His 2 1/4-length victory over Americanrevolution in the Stephen Foster was his second consecutive score at Churchill Downs, having won the Alysheba Stakes (G2) on May 6. Olympiad earned 192 votes, including three first-place votes.

Three-year-old Epicenter (83 votes), second in both the Kentucky Derby and the Preakness Stakes, jumped two spots from eighth place to sixth this week. Also moving up two spots is 3-year-old Early Voting, who won the Preakness Stakes. Early Voting now is in seventh place with 75 votes. Undefeated 3-year-old Jack Christopher, winner of the Pat Day Mile (G2) at Churchill Downs and the Woody Stephens (G1) at Belmont Park this year, is now in eighth place with 70 votes.

Three new horses entered the top 10 this week, beginning with 5-year-old Express Train. Winner of the Santa Anita Handicap (G1), Express Train comes into the rankings in ninth place with 43 votes. Tied for 10th place with 37 votes apiece are 4-year-old Americanrevolution and 3-year-old Zandon, who captured the Toyota Blue Grass Stakes (G1) at Keeneland and finished third in the Kentucky Derby.

Mandaloun, fourth in the Stephen Foster, and Donegal Racing and Mo Donegal, who has been taken out of training because of bone bruising, both have dropped out of the top 10.

The Breeders’ Cup Classic rankings are determined by a panel of leading Thoroughbred racing media, horseplayers, and members of the Breeders’ Cup panel of racing directors and secretaries. Rankings will be announced each week through Oct. 11. A list of voting members may be found here.