Ollie's Candy back on turf to lead Santa Anita's Gamely 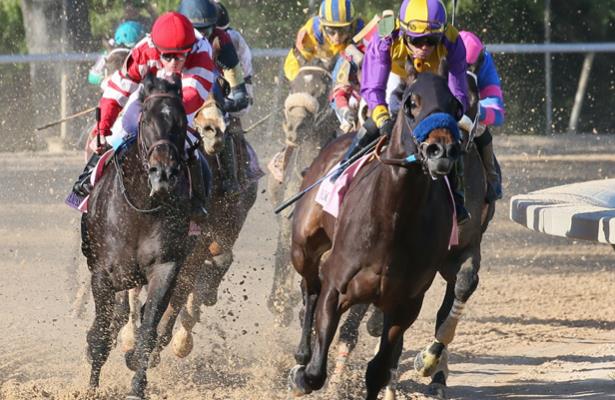 Fresh off a huge second-place finish on dirt, trainer John Sadler’s Ollie’s Candy heads a solid field of 11 fillies and mares 3 and up going a mile and one eighth on turf in Monday’s Grade 1, $300,000 Gamely Stakes at Santa Anita Park.

Named for the brilliant multiple champion Hall of Fame distaffer, the Gamely was first run at Hollywood Park in 1939 as the Long Beach Handicap and was renamed in honor of William Haggin Perry’s Gamely in 1976.

Running as the finale on an 11-race Memorial card, the Gamely follows races such as the Shoemaker Mile (G1) and Monrovia (G2), also on turf, at approximately 8:30 p.m. ET.

In what appeared to be her career-best effort on April 18, this 5-year-old Candy Ride mare finished second by a head to highly regarded Ce Ce in the Grade 1 Apple Blossom Handicap at Oaklawn Park on dirt. A Grade I winner on the main track five starts back last July at Del Mar, Ollie’s Candy hasn’t run on turf since finishing second in the Grade 3 Wilshire Stakes at Santa Anita back on June 22, 2019. Second on turf in both the Grade 1 Del Mar Oaks and Grade 2 San Clemente Stakes in the summer of 2018, she has three seconds from four tries on the lawn and is thus a major danger in the Gamely.

A lightly raced 4-year-old Florida-bred filly by Arch, she was most recently a sharp second in a Grade 2 stakes at 1 1/8 miles on turf at Tampa Bay Downs on March 7. Raced on turf exclusively in all seven career starts, she has three wins and two seconds and has shown she’s equally effective stalking the early pace or rallying from far back. Favored on four occasions, she gets the services of top jock Irad Ortiz Jr. and figures to be plenty tough shipping in from South Florida.

Dismissed at 36-1, she ran the race of her life in taking the Grade 2 Buena Vista Stakes at a mile on Feb. 22, marking her second graded stakes win on grass. A close fourth after pressing the pace in the Grade 1 Del Mar Oaks seven starts back last August, this 4-year-old Midnight Lute filly is in top form and will hope the extra furlong on Monday will be within her scope with regular rider Abel Cedillo up.