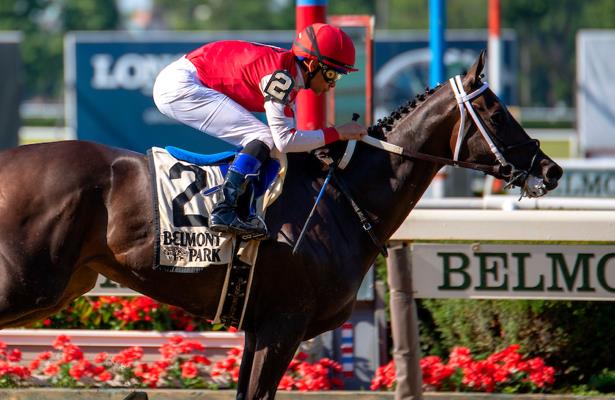 Photo: Eclipse Sportswire
Midnight Bisou, who scored an impressive six-length victory in the 2018 Grade 1 Mother Goose, returns to Belmont Park for Saturday's $700,000 Ogden Phipps (G1), a "Win and You're In" event to the Breeders' Cup Distaff, with a clear lead in the older female division.

After Midnight Bisou ended 2018 finishing third to eventual champion Monomoy Girl in the Breeders' Cup Distaff, trainer Steve Asmussen and owners Bloom Racing, Madaket Stables and Allen Racing began mapping out her 4-year-old campaign which, to date, has worked out perfectly. The Midnight Lute filly is 3-for-3 this year, including her most recent win in the Apple Blossom Handicap (G1) at Oaklawn Park on April 14.

"The Ogden Phipps has always been in the back of our minds," owner Jeffery Bloom of Bloom Racing said. "We wanted to get through the Apple Blossom first and after she won that, this race seemed like the most logical choice. It seemed like the best way to get us back to the Breeders' Cup, which is the ultimate goal."

Bloom said he hopes that his star filly and Monomoy Girl, who has been on the sidelines since the Breeders' Cup, have the opportunity to meet later this year.

"In any other year, our filly might have been champion," Bloom said. "It just shows how tough the division was last year. I hope we get to meet Monomoy Girl sometime this year. I know we're up for the challenge and it would be great for racing."

Midnight Bisou, who is scheduled to arrive at Belmont on Wednesday from her Churchill Downs base, has had five works since the Apple Blossom, including a strong five-furlong work in 59.80 seconds last Tuesday.

"She's doing great," Bloom said. "She couldn't be better. She's done everything we've asked of her."