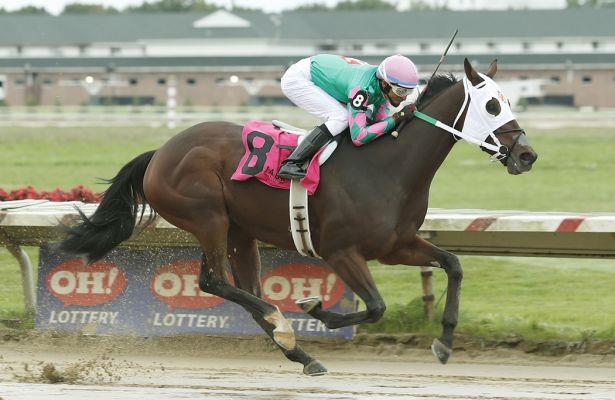 Though he has made 32 starts over the past three racing seasons, with 13 visits to the winner’s circle, Nancy Lavrich and Ronald Zielinski’s Altissimo will be entering new territory Saturday in the $100,000 Dave’s Friend at Laurel Park.

The six-furlong Dave’s Friend for 3-year-olds and up, one of six stakes worth $550,000 in purses on a 10-race Christmastide Day program, will be just the second time Altissimo has raced outside his native Ohio. He was seventh in an optional claiming allowance Dec. 28, 2016 at Turfway Park – located just across the border in Florence, Ky. – to cap his juvenile campaign.

Altissimo, which means “highest” in Italian, has six wins in his last seven starts, five of them in stakes, all of them with regular rider Christian Pilares aboard. Pilares returns on the gelded 5-year-old son of Noble Causeway from Post 2 in a field of 7, listed as the 5-2 second choice on the morning line.

“He’s just gotten real good lately,” trainer Richard Zielinski said. “He’s got a lot of speed, but he doesn’t have to be in front. The races that he’s made the lead, he’s just done it so easy that he’s ended up there. I really think he’s a better horse if he can come from off the pace, but he hasn’t had to show that lately.

“I think things have just clicked for him,” he added. “He’s a little bit of a temperamental kind of horse, and the groom that takes care of him I think really got in his head and figured him out, how to make him happy, and it’s worked.”

Zielinski took over the training of Altissimo last fall, and together they have won seven of 11 starts with one second and one third. Overall, Altissimo has finished in the top three in 20 of 32 races with $454,388 in purse earnings.

Altissimo won the Best of Ohio Sprint Stakes Oct. 13 at Thistledown by nine lengths, and followed up with a 4 ¾-length triumph in the Cardinal Handicap Nov. 3, his most recent effort, which produced a career-best 100 Beyer Speed Figure. Both races came at the Dave’s Friend distance.

Based at Mahoning Valley, Altissimo has also run at Belterra Park where he won the Edward Babst-Albert Palacios Memorial and Sydney Gendelman Memorial handicaps this spring. He also captured the Honey Jay Stakes Aug. 11 at Thistledown and owns a record of 9-2-2 from 17 tries at six furlongs.

“He’s doing good. He’s training real good here,” Zielinski said. “Really, our plan after the last Ohio-bred stake here was to just lay him up for the winter but we didn’t really want to give him four or five months off.

“We decided to keep him in training as long as the track was decent here and he’s trained very well so we thought we’d just look for a spot to run him one more time,’ he added. “Nothing was going here, so we kind of shopped around and thought let’s give him a shot, give him a little bit of a test, and see what he’s got.”

Multiple stakes winner and graded-stakes placed Laki, based at Laurel and with seven wins in 10 tries over his home track, is the 2-1 program favorite for the Dave’s Friend.

None of the top 20 trainers at Laurel Park’s fall meet has a better in-the-money percentage than Jamie Ness, whose horses have finished in the top three at a 62 percent clip from 79 starters since the calendar year-ending stand began Sept. 7.

Of those, Ness has finished second a remarkable 29 times (36.7 percent) with eight wins and $390,054 in purse earnings, good for ninth overall. He has three horses entered on Saturday’s Christmastide Day program, led by Our Super Freak in the $100,000 Gin Talking Stakes.

Ness, a career winner of 2,798 races, will send out 3-year-old filly Katie’s Reward in the opener, a $23,000 claimer for females 3 and up, and 2-year-old colt You’ll Like It in Race 4, a $40,000 maiden special weight for juveniles. Both races will be contested at six furlongs, and each horse will start on the far outside, breaking from Post 9 and 11, respectively.

“It’s hard to believe we’ve had 29 seconds. More than a third of the time we’re running, we’re second,” Ness said. “The horses are running good, they’re just getting beat. It’s just one of those deals. If we could just take half those seconds and make them wins, then we’re having a great meet.

“It’s just been one of those deals where when it all falls into place that we’ve been second [most of] the time,” he added. “I’ve been there 10 years now and this fall meet is just getting tougher and tougher every year. It’s getting harder and harder to win.”

Jagger Inc.’s 2-year-old filly Our Super Freak has both won and run second for Ness at the meet, taking a six-furlong optional claimer by 6 ¼ lengths over a sloppy, sealed track Oct. 27 and rallying to be second behind Congrats Gal in the Smart Halo Stakes Nov. 10, also at six furlongs, in her most recent outing.

Our Super Freak returns to stakes competition in the seven-furlong Gin Talking, having drawn the rail in a field of 10 juvenile fillies headed by 3-1 program favorite Please Flatter Me. Our Super Freak is listed at 12-1 on the morning line.

“She’s training really well coming into the race. I gave her a little time off after her last race because this one was a while away, and he’s had a couple real nice workouts at Laurel,” Ness said. “We’re ready to go.”

Our Super Freak, a chestnut daughter of 2003 Horse of the Year Mineshaft, has two bullet five-furlong breezes on her work tab this month, going in 57.40 seconds Dec. 14 and 58.60 seconds Dec. 23. Angel Suarez, up for the past two races at Laurel, has the return call.

“She’s just growing up and maturing,” Ness said. “She’s always been a real good workhorse in the morning, always. Transferring that to the afternoons, that’s what we’re working on now and it seems like it’s going in the right direction.”

While Claudio Gonzalez has long since wrapped up his second straight training title and eighth overall, Trevor McCarthy holds a narrow lead in the race for the riding title with three days remaining in the calendar year-ending fall meet.

Gonzalez enters Saturday with 47 wins, 18 ahead of runner-up Mike Trombetta, and will finish with a clean sweep of Laurel’s three 2018 meets. He topped the winter-spring stand with 40 wins and the summer session with 23, and his 111 wins in Maryland have him on course for his second straight overall state title.

McCarthy, Maryland’s leading rider in 2014 and 2016, missed seven months of 2017 with a shoulder injury and subsequent surgery and moved his tack to New York to start 2018 but returned to the Mid-Atlantic circuit full-time in mid-September. His 44 wins are eight more than Victor Carrasco and Julian Pimentel.

Named in nine of 10 races Saturday, McCarthy will ride Clench in the $100,000 Heft Stakes, John Jones in the Jennings, Belial in the Gin Talking, Miss Avalon in the $100,000 Thirty Eight Go Go, Cautious Giant in the Dave’s Friend and If I Was a Boy in the Politely.

Carrasco, the Eclipse Award-winning apprentice of 2013, missed nine months with a broken fibula and tibia in his right leg, the result of a Sept. 14, 2017 spill at Delaware Park, returning to action in mid-June.