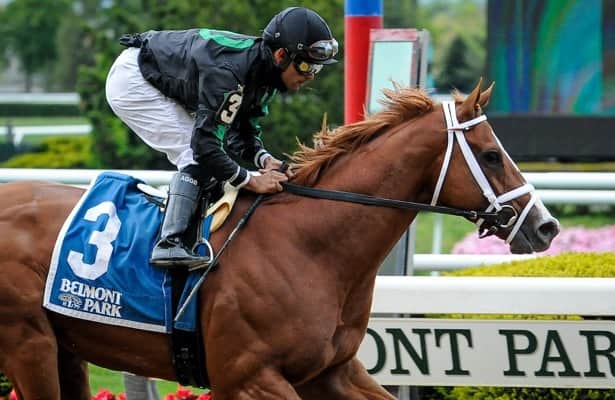 Once again, the Grade 3, $500,000 Ohio Derby at Thistledown on Saturday brings together an eclectic group of graded stakes horses and local Thistledown runners. It also features a couple of horses with big optional claiming wins who are stepping up in class.

Two of the three choices below are logical options with proven stakes experience. Of course, the exciting choice is the one with the big allowance optional claiming win at Churchill Downs. He owns the right style and a high speed figure.

1. Promise Keeper, 7-2 (Constitution – Todd Pletcher/Luis Saez – 5: 3-0-0 - $184,600): After two straight nine-furlong wins in an optional claiming race at Keeneland and the Peter Pan Stakes (G3) at Belmont, Promise Keeper is an obvious contender. He shows a 112 and 110 TimeformUS Speed Figure for those two races, which puts him in the mix with the best horses here. The rail draw is no bargain, as it might force Luis Saez to use Promise Keeper’s energy too soon. Nevertheless, this is a logical runner with tactical speed and a proven record at nine furlongs. Other handicappers will jump on board with this one, but there is little to knock. Win contender.

2. Falcons Fury. 30-1 (Fed Biz – Timothy Maxey/Edgar Paucar – 9: 2-3-0 - $27,370): Given that Falcons Fury lost a local allowance race and one at Belterra Park last month, it is hard to endorse him for any spot. On TimeformUS, his highest dirt speed figure is a 91, which puts him below the level needed to even hit the super. Toss.

3. Hozier. 12-1 (Pioneerof the Nile – Rodolphe Brisset/Chris Landeros – 5: 1-2-0 - $280,260): Hozier followed his second-place finish in the Rebel Stakes (G2) with a lifeless sixth by 19 3/4 lengths in a weak version of the Arkansas Derby (G1). One month later, Hozier finished a close second to The King Cheek in the Sir Barton Stakes, which burned quite a bit of money since Hozier started the race as the 3-5 favorite. Perhaps this expensive Pioneerof the Nile colt is eligible to improve under Rodolphe Brisset’s care, but do many horses improve away from Bob Baffert? He needs to prove himself at the graded stakes level again before trusting him. Toss.

4. King Fury. 9-2 (Curlin – Kenneth McPeek/Corey Lanerie – 6: 3-0-0 - $262,739): From a visual standpoint, King Fury put on a great show with his closing rush to win the Lexington Stakes (G3) at 18-1 in April. He took advantage of a generous pace setup though over slop after opening fractions of 22.39 and 45.87. The question is whether King Fury can repeat the performance under a more moderate pace setup and drier conditions. Remember the old rule about not chasing upset winners. Bettors want to make the wedding, not the funeral. In most cases, the odds drop too low and make betting on a second win in a row not worth the risk. For what it is worth, King Fury did earn a field-high 117 TimeformUS Speed Figure for the Lexington win. Use underneath.

5. Ethical Judgement. 8-1 (Honor Code – Brendan Walsh/Martin Garcia – 4: 2-2-0 - $131,848): This Honor Code colt lost to a good horse in Fulsome two starts ago over the slop in a Keeneland allowance race in April. He set the pace before giving way and holding second. Ethical Judgement then won at Churchill Downs last month by 3 1/2 lengths with a decent 109 TimeformUS Speed Figure while racing over the slop again. The forecast calls for light rain, but the race likely will run over fast dirt. Another concern is that all three of his dirt races came in off-the-turf contests. Limit him to the very bottom slots. If it rains hard, think about upgrading. Use underneath.

6. Hello Hot Rod. 15-1 (Mosler – Shawn Davis/Francisco Arrieta – 5: 3-1-0 - $121,441): Considering his fourth-place finish in the Federico Tesio Stakes at Pimlico, it is hard to imagine Hello Hot Rod contending in this field. At least Hello Hot Rod’s overall win-loss record is admirable, with his only trifecta miss coming in the Federico Tesio. In that race, Hello Hot Rod was only 3 3/4 lengths behind Excellorator and The Reds, but he had no excuse to not finish closer as a big opening came in front of him when Excellorator drifted out. He is outclassed here. Toss.

7. The Reds. 6-1 (Tonalist – John Kimmel/Dylan Davis – 8: 2-1-1 - $187,980): If nothing else, The Reds loves nine furlongs. He owns a 4: 2-1-1 record at this distance, including his maiden win at Aqueduct in January and a win via disqualification in the Federico Tesio Stakes at Pimlico. His speed figures are light, with his high number a 106 TimeformUS Speed Figure for the Federico Tesio win. Given his love for nine furlongs, though, he is worth including in the bottom slots. Use underneath.

8. Keepmeinmind. 4-1 (Laoban – Robertino Diodoro/David Cohen – 8: 1-2-1 - $484,987): Gradually, this closer has taken steps forward this year. After lackluster efforts in the Rebel Stakes (G2) and Blue Grass Stakes (G2), Keepmeinmind made a notable move to finish seventh in the Kentucky Derby. While seventh might not sound like a great position, the Derby is a different kind of race, with 19 or 20 horses. Keepmeinmind went from 19 lengths behind to 8 1/2 lengths back at the wire, and that is a ton of ground to make up. Then in the Preakness, Keepmeinmind tried hard for a decent fourth by 9 1/2 lengths behind Rombauer, with Midnight Bourbon in second and Medina Spirit third. In both the Derby and Preakness, he shows a 109 on TimeformUS for his efforts, and he avoids the top horses from those races in this spot. The lack of wins is one negative, but he is supposed to fare well cutting back in class. Win contender.

9. Proxy. 5-1 (Tapit – Michael Stidham/Joe Bravo – 7: 2-3-0 - $237,700): For bettors, Proxy is a frustrating horse to use on top. After a promising start to his season with runner-up finishes in the Lecomte Stakes (G3) and Risen Star Stakes (G2), Proxy hung in the Louisiana Derby (G2) and ended up fourth by 3 3/4 lengths. For what it is worth, Proxy still shows a career best 111 TimeformUS Speed Figure for the Louisiana Derby run. In his Lexington Stakes over slop, Proxy ran fourth again by six lengths after receiving a generous pace setup. His last win came on Dec. 19 at Fair Grounds, when he won an allowance race by 2 1/2 lengths after contesting the pace. It is possible that Proxy needs the lead for his best shot, but the pace figures signal he is too slow to make the front in this spot. Expect another move where Proxy looms boldly on the turn and fails to finish off the job. Use underneath.

10. Masqueparade. 8-1 (Upstart – Albert Stall Jr./Miguel Mena – 5: 2-0-1 - $122,208): Now, here is an exciting horse that can add fresh blood to this division. In his fifth lifetime start, Masqueparade blew the field away by 11 3/4 lengths in a nine-furlong allowance optional claiming race at Churchill Downs. Masqueparade also shows a 114 TimeformUS Speed Figure for the dominant Churchill win, which falls short of only King Fury’s 117 in the Lexington. Forget about Masqueparade’s first three races, as he was still in developmental mode. As shown recently, the nine-furlong distance is not a question and his best figure beats most of the field. Plus, Masqueparade owns useful tactical speed as he chose the stalker position in third for the first part of the Churchill race. He lacks graded stakes experience, and that is a shortcoming to take seriously. He also beat a weak field in that optional claiming romp. Nevertheless, this son of Upstart has the markings of a serious 3-year-old, and he may prove it here. The key is to not accept a low price, as bettors need value to make up for the lack of stakes experience. The pick.

11. Channel Fury. 20-1 (Even the Score – James Jackson/Luis Rivera – 6: 3-2-1 - $54,120): From a speed figure standpoint, Channel Fury is not out of reach. In a runner-up effort in a local May 3 one-mile allowance, he put up a 104 on TimeformUS. Then on May 24, Channel Fury went forward with a 5 1/2-length win in a six-furlong allowance with a 107, a number that is good enough to hit the board here. The big warning flag is that he held a five-length lead at one point in the one-mile allowance before fading to second by one length. Yet in the six-furlong sprint, he took up the stalking role in fourth and went on to victory with a strong finish. On paper, it looks like his optimal distance is six furlongs, and this race is nine furlongs. In Channel Fury’s favor, trainer James Jackson is hot with a 39 percent strike rate at Thistledown in the last year. This is a hard one to pass on given the strength of his trainer, but the post is bad and he needs to prove himself beyond one mile. Toss.

If Masqueparade stays at 8-1, he is a great win and place bet. He owns the speed to clear from his post, and neither the distance or speed figures are a problem. Although he steps up in class, the higher odds are supposed to make it worth the risk. He is not a fair value at 3-1 or 7-2. At 9-2 or higher, though, he is a fair bet.