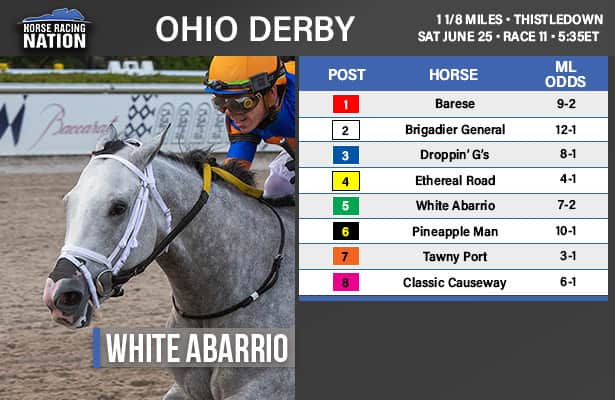 The $500,000. Grade 2 Ohio Derby, which will be run on Saturday at 1 1/8 miles at Thistledown in the suburbs of Cleveland, drew a field of eight 3-year-olds led by White Abarrio.

The 2022 Ohio Derby field includes the winners of the Florida Derby (G1), Tampa Bay Derby (G2), Holy Bull (G3) and Lexington (G3). Two other 3-year-olds who won stakes races are in the field, and a trio of the contestants ran in the Kentucky Derby (G1).

In Ohio, the medication Lasix is allowed in stakes races.

Here is a full-field analysis for the Ohio Derby with the official track morning-line odds. The race is scheduled for 5:35 p.m. EDT and is carded as race 11 of 11.

1. Barese (9-2 – Laoban – Michael Maker / Kendrick Carmouche – 5: 3-0-1 - $205,250) Barese is the first of two New York-breds in the field, and both are trained by Mike Maker. He won his first three starts including a pair of state-bred stakes at Aqueduct. That prompted Maker to try him on the Kentucky Derby trail, where he finished fifth beaten by only five lengths in the Wood Memorial (G2) after staying close to the pace. When the Triple Crown series ended, the Wood had produced the winners of the Preakness and the Belmont Stakes. In April, Barese was third in a New York Stallion Series stake cutting back in distance to six furlongs. The nine-furlong distance of the Ohio Derby might be too far, but he will get Lasix for the first time. Toss.

2. Brigadier General (12-1 – Street Sense – Dallas Stewart / Reylu Gutierrez – 8: 1-2-1 - $112,766) It took seven starts for this colt to break his maiden, and that included four races as a 2-year-old. His first win happened at Keeneland in April going two turns while pressing the pace. Last month, Brigadier General faded to fourth in an allowance at Churchill Downs. He certainly will be at the highest odds of his career in his first try in stakes company. SCRATCHED

3. Droppin G’s (8-1 – Klimt – Jerry Antonulk / Malcolm Franklin – 10: 2-0-3 - $122,298) Droppin G’s has the most experience in this field, with 10 starts. His highest level of success came in an allowance at Turfway Park on the Tapeta surface in March. He made his first seven starts at Turfway and began his career getting claimed for $15,000 and then $20,000. The son of Klimt raced on the turf once and then his last two were on the main track at Churchill, with a fourth in the Matt Winn (G3) two weeks ago. It looks like the Tapeta might be his best surface. Toss.

4. Ethereal Road (4-1 – Quality Road – D. Wayne Lukas / Rafael Bejarano – 8: 2-1-1 - $354,545) Ethereal Road won his most recent start in the Sir Barton at Pimlico on Preakness weekend. He made a strong, wide rally and drew off to win that race, which was restricted to non-winners of a stake, by almost five lengths. Of course, he was the last scratch from the Kentucky Derby, allowing the eventual winner Rich Strike into the field. Hall of Fame trainer D. Wayne Lukas also considered running him in the Belmont Stakes, but this Ohio Derby field seems like a more appropriate start. Win contender.

5. White Abarrio (7-2 – Race Day – Saffie Joseph Jr. / Tyler Gaffalione – 6: 4-0-1 - $823,650) White Abarrio will make his first start since running 16th in the Kentucky Derby (G1) at odds of 15-1. In the Derby, he was unable to get into his usual stalking position in the traffic of the 20-horse field and was never a threat. Remember that White Abarrio went into the Run for the Roses after two impressive victories on the Derby trail in the Florida Derby (G1) and the Holy Bull (G3). Any effort close to those performances will make this son of Race Day very hard to beat at Thistledown. All four of his wins were at Gulfstream Park, so he still has to prove that he can win away from his home base in Florida. He will run with first-time Lasix. Top choice.

6. Pineapple Man (10-1 – Gormley – Michael Maker / T.D. Houghton – 5: 1-2-1 - $77,600) Pineapple Man is the second New York-bred in this field, and he made all five of his starts against state-breds. He broke his maiden in his third start at Aqueduct in February and since then was second twice in allowance races while racing as part of the early pace. Toss.

7. Tawny Port (3-1 – Pioneerof the Nile – Brad Cox / Irad Ortiz, Jr. – 6: 3-1-0 - $427,000) Tawny Port is one of three graded-stakes winners in this field. He won the Lexington Stakes (G3) at Keeneland in April and went from there to the Run for the Roses, where he finished seventh after being fifth at the top of the stretch. In the Derby, he saved ground and was able to rally from 11 lengths behind. Tawny Port won the first two starts of his career at Turfway Park and was second in the Jeff Ruby (G3) there. Brad Cox runners have been running well in stakes races across the country the past few weeks. He ran with Lasix in his second start. Win contender.

8. Classic Causeway (6-1 – Giant’s Causeway – Kenny McPeek / Brian Hernandez Jr. – 7: 3-1-1 - $230,250) Classic Causeway won twice on the Kentucky Derby trail in the Sam F. Davis (G3) and the Tampa Bay Derby (G2) and then was 11th on the first Saturday in May after breaking slowly and having to steady. Subsequently, he was moved from trainer Brian Lynch to Kenny McPeek. Classic Causeway will make his first start for the new barn at Thistledown, where he also will get a new rider and run as the only horse without Lasix. He won both of those Derby preps in Florida racing on the front end. Win contender.

Summary: A $500,000 purse should attract a quality field, and that is certainly the case with this year’s Ohio Derby. Classic Causeway, Tawny Port and White Abarrio all were winners on the Kentucky Derby trail and went on to run in the big race on the first Saturday in May. That makes them the main win contenders along with Ethereal Road, who was a last-minute scratch from the Run for the Roses.

It is important to note that all of the field will race with Lasix except Classic Causeway. White Abarrio and Barese will run with that medication for the first time.

A few horses in the field prefer to be forwardly placed but will not run too fast too early. Which means that the pace scenario should be fair for all.

The Thistledown morning line shows 7-2 odds on White Abarrio. He will have to prove that he can win outside of Florida, but to me, he is the horse to beat. His Derby trail wins were outstanding, including his victory over the Belmont Stakes winner Mo Donegal in the Holy Bull. He will get a positive setup for his stalking style, and getting Lasix for the first time should be helpful. Final odds of 3-1 or 5-2 on White Abarrio would be generous.