Off the Tracks Proves Talent in Grade 1 Mother Goose 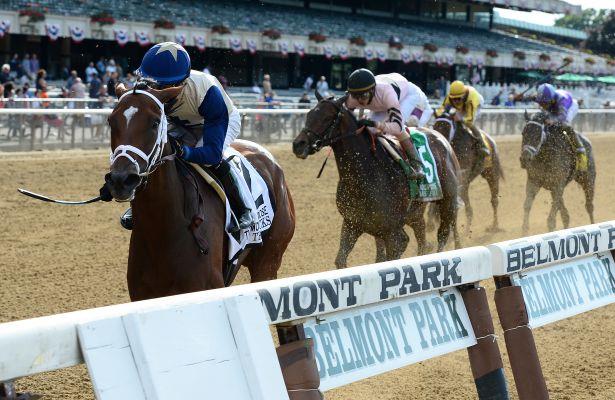 Todd Pletcher sent out three fillies in the $300,000 Grade 1 Mother Goose Stakes, but it was not the favorite Rachel’s Valentina who shined. The daughter of Horse of the Year Rachel Alexandra, who won the 2009 Mother Goose, struggled throughout the race. Instead it was Off the Tracks who held a cool lead all the way around Belmont’s track, proving she still has that same brilliance which was hinted at last year.

Breaking from post two, Jose Ortiz sent Off the Tracks straight to the lead when the gates opened. Longshot Mom’s On Strike settled just outside of Off the Tracks in second, with Lewis Bay trailing in third on the rail. Rachel’s Valentina checked in fourth, but never seemed to completely settle under jockey John Velazquez. Mo d’Amour and Lightstream settled in the back of the field as Linda Mimi fell from mid-pack to dead last. Off the Tracks easily ticked off fractions of :22.79, :45.53, and 1:09.62.

Ortiz guided the confident Off the Tracks into the final stretch and the pair kept bounding forward as the finish line approached. Lewis Bay put in a gallant chase, but Off the Tracks was simply too good. The Curlin filly finished 3 1/2 lengths ahead of Lewis Bay, with previously undefeated Lightstream a length back in third. Mo d’Amour was fourth, followed by Rachel’s Valentina after a lackluster performance. Mom’s On Strike and Linda Mimi rounded out the field. The 1 1/16 miles test for three-year-old fillies was completed in 1:41.01.

Pletcher was pleased with Off the Track’s race. “We weren't positive what a couple horses would do but we felt that if she [Off the Tracks] got a clean break there was a decent chance that she would be on the lead, so that was plan A with her,” he said. “Even though the fractions were very fast, the track seems to be playing pretty fast today, so I was a little concerned going as fast as they were, but she seemed to be doing it comfortably and in good rhythm. I was happy to see her have something left to finish.”

Ortiz was also elated with his mount. “She broke good and was very alert. We went a bit fast but she wasn't pushed all the way to do that. She was relaxed and did it by herself.”

In regards to Rachel’s Valentina, “I really don't have a great explanation,” commented Pletcher. “It looked like she was in a decent spot, but Johnny seemed like he had to start asking her for a lot earlier than you would expect him to. We'll see how she comes out of it and try to regroup.”

Off the Tracks, owned by J Stables, was highly regarded as a two-year-old after an impressive win in the grade 3 Schuylerville Stakes at Saratoga while with former trainer Roderick Rodriguez. Unfortunately, the filly was sidelined from a knee injury that required surgery. She came back at three in the Margate Handicap and won by an easy 4 1/4 lengths. Her next start was with Pletcher after Newtown Anner Stud had bought into her. She was third in the Gulfstream Park Oaks, causing her to miss the Kentucky Oaks with a lack of points, but followed that effort with a game second behind Carina Mia in the Acorn.