Odds-on Under the Stars takes the Santa Ynez for Baffert 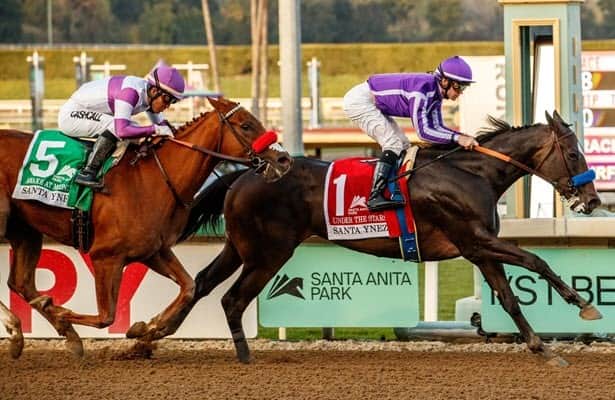 Under the Stars backed up her maiden win last month at Los Alamitos with a victory in the Grade 2, $200,000 Santa Ynez Stakes (G2) at Santa Anita on Saturday.

While the seven-furlong Santa Ynez is an official stop on the road to the Kentucky Oaks, Under the Stars will not receive the 10 qualifying points available to the winner. Her trainer, Bob Baffert, is barred from competing in both the Kentucky Oaks and Kentucky Derby for the next two years by order of host track Churchill Downs. Any points won by Baffert's horses will be vacated.

Under the Stars, dispatched as the 4-5 favorite, attended a contested pace of 22.26 and 44.95 seconds for the opening half mile under Flavien Prat before gamely holding off Awake at Midnyte by three-quarters of a length.

"She really dug in, it was nice to see her do that," Prat said. "She broke well, I didn't know what to expect as far as speed before the race, but since she broke well, I used that to my advantage. She took the heat and dug in down the lane, so it was a good run. The (distance) was perfect for her."

Awake at Midnyte, a debut winner who most recently was second by a nose in the Jimmy Durante (G3) on turf for trainer Doug O'Neill, earned four points towards the Kentucky Oaks. She was followed across the wire  by Miss Mattie B (2 points) and Big Switch (1).

Under the Stars is by Pioneerof the Nile out of the Storm Cat mare Untouched Talent, which makes her a half sister to Grade 1 winner and sire Bodemeister. She is owned by the Coolmore partnership of Michael B. Tabor, Mrs. John Magnier and Derrick Smith.

Under the Stars was third in a pair of sprints to start her career before graduating at Los Alamitos going six furlongs on Dec. 11.

"She's improving," Baffert said. "She's been working heads up with that filly that won yesterday (Adare Manor, 12-length maiden winner). When we came into this race, I was worried about the (inside) post, but she's improving. She's a half sister to Bodemeister, so she has the pedigree to go further and Flavien thinks she want to go further also.

"It's nice when they're bred that well and the Coolmore gang, the ownership group, they've been real patient," Baffert added. "I'm just glad they sent her to us."