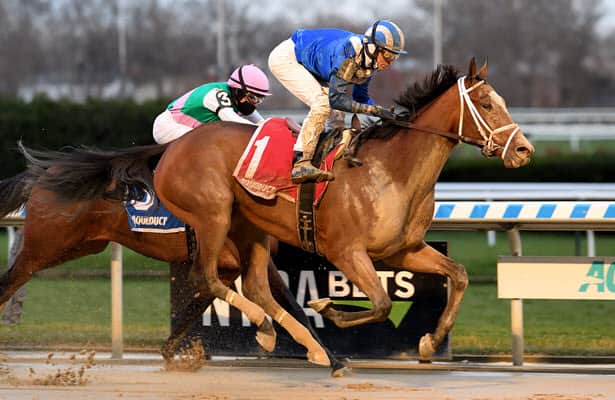 Shadwell Stable's Malathaat uncorked a late rally under Hall of Famer John Velazquez to run down Millefeuille in the shadow of the wire and win the Grade 2, $150,000 Demoiselle Stakes for 2-year-old fillies at Aqueduct.

Sent off the heavy odds-on favorite, Malathaat raced well off a moderate pace set by 25-1 shot Traffic Lane with second-choice Millefeuille stalking the leader under Joel Rosario. Millefeuille made an early move down the backstretch to seize the lead in the 1 1/8-miles contest and proceeded to spurt away from the field on the turn through six furlongs in 1:13.33 on a sloppy track.

Malathaat, who appeared to possibly be struggling with the wet surface throughout while racing on the inside, had just one horse beat at the quarter pole and the leader looked to be headed to victory. But when eased out for clear racing room, Malathaat steadily ate into the lead and surged to the front in the final 100 yards to win by three-quarters of a length. She is perfect in three starts for trainer Todd Pletcher.

“She wasn’t comfortable inside," Pletcher said of Malathaat, who broke from the inside stall. "I think she was unsure of the footing early on. In her first two starts, she had easy trips without much dirt in her face.

"I was worried at multiple points of the race," Pletcher continued. "Sometimes drawing the rail is great and this time it seemed to have backfired on us a couple of times. In the final eighth of a mile, she was able to get into her comfort zone and rhythm and that’s when she showed what she’s all about.

Malathaat, who paid $2.90, completed the trip in 1:52.35. As an official stop on the road to the 2021 Kentucky Oaks, the daughter of Curlin out of Grade 1 winner Dreaming of Julia collects 10 qualifying points. Millefeuille, who was exiting a sharp maiden win for Hall of Famer Bill Mott, earned four qualifying points. She was followed across the wire by Malibu Girl (2 points) and Cafe Society (1).

“Her class was what kept her going and got here there on time," said Velazquez, who collected a record seventh Demoiselle win. "She was never comfortable and not running into a spot I wanted. She never really put that much effort into keeping a spot. Finally, when I tipped her out heading to the quarter-pole, she started running.
“When I got her out, she put her ears up. Little by little, when she got to the other horses, she started going.”

Malathaat beat maidens going seven furlongs upon unveiling at Belmont Park on Oct. 9 and came back to win the Nov. 6 Tempted Stakes at Aqueduct. She was a $1,050,000 purchase by Shadwell at the 2019 Keeneland September Yearling sale.

Pletcher, who earned a record sixth Demoiselle win, said Malathaat will be sent to Florida for the winter with the Kentucky Oaks being the major objective.

“I’ll talk to the guys at Shadwell and [vice president and GM] Rick Nichols and we’ll come up with a game plan," Pletcher said. "We felt like she’s an Oaks-caliber filly and we’ll take her down to Florida pretty soon and start preparing for that.”