Odds-on Corniche coasts to victory in the American Pharoah 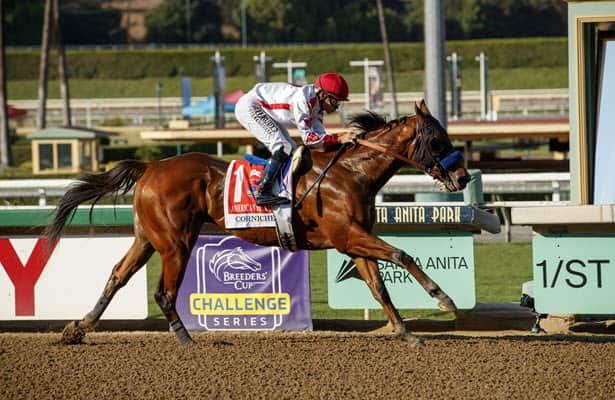 With the win, Corniche earns a fees-paid berth into the $2 million Breeders' Cup Juvenile at Del Mar on Nov. 6. The American Pharoah was also an official stop on the road to the 2022 Kentucky Derby. However, Corniche will not be awarded qualifying points due to Baffert's two-year suspension from Churchill Downs related to Medina Spirit's failed drug test at this year's Derby. Instead, the 10 points to the winner will be vacated, according to the policy put in place by Churchill Downs.

Sent off the heavy 2-5 favorite, Corniche broke sharply from the rail and outran stablemate Rockefeller to the first turn. He set fractions of 23.55, 47.26 and 1:11.91 for six furlongs while being pressed by Rockefeller with Pappacap stalking on the outside. Corniche put away Rockefeller entering the stretch and also repelled a bid by Pappacap before coasting to the wire an easy winner 3 1/4-length winner.

“There’s just so much upside to this horse,” Smith said. “This is what’s really exciting about him.  When he broke his maiden as impressive as he did, he just gave me that feeling that we weren’t even close to his full potential…He’s a big colt and he carries a lot of flesh.  As he starts to get even fitter and harder inside, he’s gonna be a force to reckon with.”

Pappacap stayed on for second and was followed across the wire by Oviatt Class and Rockefeller.

“You never know until you send them two turns whether they’ll be able to handle it or not, and it looked like he handled it pretty well,” Baffert said. “He’s got a great mind, so I’m pretty happy about that. I loved how they both broke well and were forwardly placed, that's where we like to be.  Down the backside, he was being chased by a really good horse (Rockefeller).”

A $1.5 million auction purchase earlier this year, Corniche also led at every call in his 5 1/2-furlong bow at Del Mar Sept. 4 when winning by 4 1/4 lengths. By Quality Road, he is out of the Najran mare Wasted Tears, a multiple graded-stakes winner.