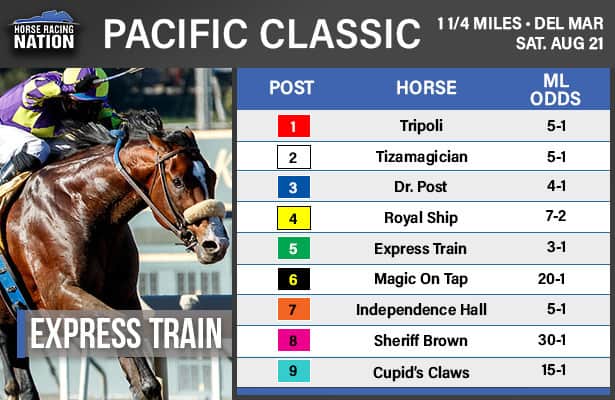 For bettors who enjoy competitive fields with high quality, the Grade 1, $1 million Pacific Classic at Del Mar on Saturday looks like a great race to study. This edition of the 1 1/4-mile dirt race for older horses features nine well-matched horses.

The 3-1 morning line favorite Express Train is a capable horse, as well as a consistent one with 10 trifecta finishes out of 12 career starts. With such a slim advantage over his foes though, it makes sense to search elsewhere for the winner.

The Pacific Classic is carded as Race 10 with a post time of 6:30 PDT.

1. Tripoli, 5-1 (Kitten’s Joy – John Sadler/Tiago Pereira – 13: 3-3-3 - $211,960): In his most recent start, Tripoli made a closing bid to finish second in the San Diego Handicap (G2). He only lost by a half-length to Express Train, while outfinishing Royal Ship on the inside for second. In this race, Express Train is 3-1 on the morning line, while Royal Ship is 7/2. Is there any difference between Express Train, Royal Ship and Tripoli? Half a length is not a huge deficit to make up on the San Diego winner, and now Tripoli gets the classic 1 1/4-mile distance to work with. This son of Kitten’s Joy might end up as a sneaky overlay, even with the familiar team of trainer John Sadler and Hronis Racing behind him. Win contender.

2. Tizamagician, 5-1 (Tiznow – Richard Mandella/Flavien Prat – 18: 5-7-0 - $427,851): The late-blooming Tiznow colt has found his home in dirt marathons. Now he cuts back to 1 1/4 miles, which might prove too short for him against Grade 1 competition. When Tizamagician tried this distance in the Santa Anita Handicap (G1), he could not accelerate with the other horses in the stretch and faded to fifth. He did not seem tired though. On the gallop out, notice that Tizamagician began to pass horses again. This is the kind of horse who runs with a one-paced style, which is more suitable for the long grind of a 1 1/2 mile marathon. Against the right horses, he can win at 1 1/4 miles or shorter, but not against this level of competition. Toss.

3. Dr Post, 4-1 (Quality Road – Todd Pletcher/Joel Rosario – 9: 4-1-1 - $700,635): Dr. Post carries some momentum into this race after making a wide move in the Monmouth Cup to win by 1 ¼ lengths while handridden. Of course, every horse wins at Monmouth under a hand ride because of the whip ban. The runner-up Night Ops ran a strong second to Art Collector in the Alydar Stakes in his next start. Earlier in the year, Dr Post also won the one-mile Westchester Stakes (G3) in preparation for the Metropolitan Handicap (G1). In between those races though, he gave a poor effort in the Met Mile with a fifth-place finish. Also, the 1 ¼-mile distance poses a question mark, especially with a sprint-oriented dam side. Based on the visually strong Monmouth win though, Dr Post is a threat in this spot. Win contender.

4. Royal Ship (BRZ), 7/2 (Midshipman – Richard Mandella/Mike Smith – 14: 6-2-3 - $293,305): For at least two races in the spring, this 5-year-old gelding put up some exciting speed figures. In April, Royal Ship won the Californian Stakes (G2) at Santa Anita by a head after a stretch battle with Country Grammer with an impressive 131 TimeformUS Speed Figure. Only top horses break 130 on TimeformUS, such as the division leader Knicks Go. Then in the Hollywood Gold Cup (G1), Royal Ship had another stretch battle with Country Grammer and this time ran second. However, he still put up a 129 on TimeformUS.

5. Express Train, 3-1 (Union Rags – John Shirreffs/Juan Hernandez – 12: 4-4-2 - $659,300): If nothing else, this is a consistent horse with 10 trifecta finishes in 12 starts. He began his campaign by winning the San Pasqual Stakes (G2) by 3 1/4 lengths, hinting at a breakout season. Express Train then ran second in the Santa Anita Handicap (G1), losing by half a length to Idol. Afterwards, his momentum died down with a third-place finish as the 9/5 favorite in the Oaklawn Handicap (G2). He then went home and ran third again in the Hollywood Gold Cup without even threatening Country Grammer or Royal Ship.

But in the local San Diego, Express Train won and beat Royal Ship in the process. With Royal Ship and others bringing their “A game” to the Pacific Classic though, it just feels like someone else’s turn this time, especially considering he lost his two 1 1/4-mile starts. Use underneath.

6. Magic On Tap, 20-1 (Tapit – Bob Baffert/Abel Cedillo – 7: 3-2-0 - $233,800): Even though this son of Tapit is trained by Bob Baffert, he appears overmatched on paper. He lost by 6 3/4 lengths to Express Train in the San Diego and by 23 3/4 lengths to Royal Ship in the Californian Stakes. With that said, Magic On Tap won the Triple Bend Stakes (G2) in between those two races at the seven-furlong distance. Maybe Magic On Tap needs to sprint more often, as his route efforts do not match the top competitors in this race. Toss.

7. Independence Hall, 5-1 (Constitution – Michael McCarthy/Florent Geroux – 10: 4-1-2 - $654,600): Going back to his Florida Derby (G1) effort last year, Independence Hall just does not look like a longer router. He was a flat fifth in that race. Earlier this year, he did run third in the Pegasus World Cup, losing by only three lengths to Knicks Go. However, he did not show any finishing punch late and even lost the runner-up position to Jesus’ Team. Then in the Big Cap, he ran a mild fourth with no finishing punch yet again. In his most recent start, Independence Hall was a distant third by 9 3/4 lengths to Royal Ship in the Californian Stakes. While Independence Hall figures to secure a good close-up stalking position again, the 1 1/4-mile distance is too long for this son of Constitution. For those playing trifectas and superfectas, he might fit in the third and fourth slots though. Use underneath.

8. Sheriff Brown, 30-1 (Curlin – Todd Fincher/Edwin Maldonado – 21: 6-5-3 - $232,811): Given he finished seventh by 8 3/4 lengths in the San Diego Handicap, Sheriff Brown’s chances do not appear great in this spot. Two races ago, he also ran fifth in the Sexton Mile (G3) at Lone Star Park. Trainer Todd Fincher is not a name seen on the big stage often, as seen by Sherriff Brown’s starts at Lone Star, Sam Houston, Delta Downs and Zia Park. Sheriff Brown is simply overmatched. Toss.

9. Cupid’s Claws, 15-1 (Kitten’s Joy – Craig Dollase/Umberto Rispoli – 22: 4-4-3 - $216,940): His second-place finish to Tizamagician in the local 1 ½-mile Cougar II Stakes (G3) is not terrible. Two starts ago though, he lost by 12 1/4 lengths in a one-mile allowance race at Santa Anita. Last September, he won the 1 ½-mile Tokyo City Cup at Santa Anita. Does this horse need a marathon distance at the highest level? He did run second in the one-mile All American Stakes (G3) at Golden Gate only three months ago, but it came against lesser competition. His problem is likely the same as the one-paced Tizamagician. As a midpack runner though, he could close well enough to reach third or fourth with the right pace. Use underneath.

If Royal Ship runs back to his Californian or Hollywood Gold Cup effort, he wins. However, Tripoli is an interesting value option who has never had a chance to run 1 1/4 miles before. What if he moves forward with the extra distance?

Dr Post could win too, if he could take one more step forward off his Monmouth Cup win and handle the 1 1/4-mile distance. But there is less confidence in trusting him.