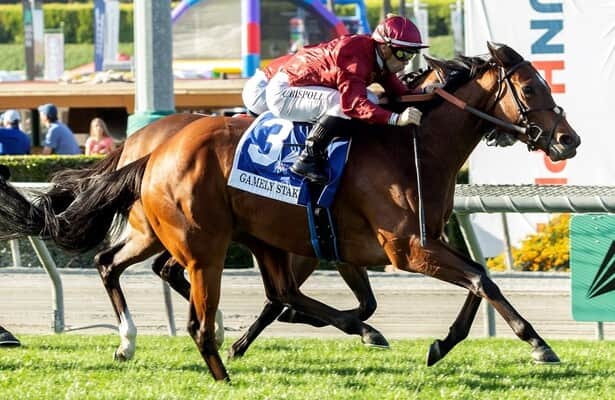 The Irish-bred daughter of Australia, dispatched at 5-1 in a six-horse field, crossed the wire a length in front of second choice Going to Vegas (2-1) for trainer Brendan Walsh and owner Qatar Racing. Odds-on favorite Going Global finished another length back in third.

This was Rispoli’s second win and first stakes win at Santa Anita since returning from a stint riding in Kentucky this spring where he was winless.

“It was a tough situation,” Rispoli said of his foray east. “But if I didn’t go to Kentucky, I wouldn’t have won the Gamely. That’s how I picked up this ride.”

For Ocean Road, this was her second trip to Southern California. After making five starts in England for trainer Hugo Palmer, she was shipped stateside last year to compete in the Breeders’ Cup Filly & Mare Turf. She finished sixth at 75-1.

“I knew she was going to run a good race,” Walsh said. “Whether it was good enough or not remained to be seen.”

“It was exactly as we kind of planned,” he added. “Umberto had her in a nice spot. But there were a couple of nice fillies in there, and we knew we wouldn’t get by them too easy. But she kicked in good, and it’s always nice to see that from a horse coming over here to run in this country.”

Ocean Road prepped for the Gamely with a nose victory in an entry-level allowance at Keeneland on April 15 in her only start since the Breeders’ Cup. She boasts a record of 8: 3-1-2 with earnings of $351,772.

“She was very impressive at Keeneland and we thought she would need a run,” Walsh said. “With this race, at a mile-and-an-eighth, we thought it would be a good spot to take a shot. She has been doing really, really well ,and she ran to her works.”

What’s next for Ocean Road remains to be determined, Walsh said, although the $500,000 Diana (G1) at Saratoga on July 16 is on the radar.

“I think there is some room for improvement from her again, and I don’t see why she won’t keep going forward,” Walsh noted.