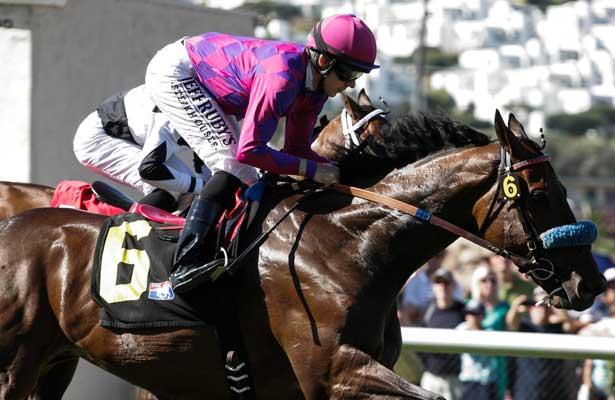 A winner of last year’s American Handicap at the now-shuttered Hollywood Park, front-running Obviously will try to overcome a 7 ½ month layoff as he faces another front-running sort in recent Grade I winner Winning Prize, who seeks his third graded win in-a-row in Saturday’s one mile turf Grade III, $100,000 American, which will be run for the first time at Santa Anita.

Previously trained by the recently retired Mike Mitchell, Obviously is now conditioned by longtime Mitchell assistant Phil D’Amato.  After winning the American on May 25 of last year, Obviously, with regular rider Joe Talamo up, went on to win the Grade I Shoemaker Mile (turf) on June 29 and the Grade II Del Mar Mile (turf) on Aug. 25.

Fourth as the 1-2 favorite when rated off the pace in the Grade II City of Hope Mile (turf), Obviously showed the way midway around the far turn in the Grade I Breeders’ Cup Mile (turf) on Nov. 2, but tired through the drive to finish fifth, beaten six lengths by eventual two-time Horse of the Year Wise Dan.

Owned by Joseph Scardino and Anthony Fanticola, Obviously, a 6-year-old Irish-bred gelding, has a string of bullet turf works for his return and could pose an elusive target on the front end Saturday.  He has six wins from nine starts at a mile on grass and is 18-9-4-2 overall, with earnings of $1,037,361.

Trained by Neil Drysdale, Argentine-bred Winning Prize comes off an authoritative win in the Grade I Frank E. Kilroe Mile (turf) on March 8.  A winner two starts back of the Grade II Arcadia Stakes at one mile on turf Feb. 1, 5-year-old Winning Prize went to the front three starts back in the Grade II Citation Handicap at 1 1/16 miles on grass and just missed, finishing third, beaten three quarters of a length by Silentio, who he will again face on Saturday.

A three-time Group I winner in Argentina, Winning Prize will likely sit a close to the early pace in what will be his sixth stateside start.  With five wins from six tries at a mile on grass, Winning Prize is 13-8-1-1 overall with earnings of $610,840.  He’s owned by David Heerensperger and Jose Nelson and will be ridden by Corey Nakatani, who was up for the Kilroe win.

A winner of the Grade I Citation Handicap two starts back on Nov. 29, trainer Gary Mandella’s Silentio was a close fifth, beaten two lengths, in his most recent start, the Kilroe Mile on March 8.  Three starts back, he was a big third, beaten 1 ½ lengths, by Wise Dan in the Breeders’ Cup Mile Nov. 2.

A five-year-old horse by the Sunday Silence stallion Silent Name, Silentio is owned by his breeders, Wertheimer and Frere.  Ridden primarily from off the pace in his last eight starts by the recently injured Rafael Bejarno, he will be ridden for the first time by Gary Stevens.  With two wins, a second and three thirds at one mile on turf, Silentio’s overall mark stands at 11-4-1-4, with earnings of $633,960.

Wertheimer and Frere will also be represented by Smart Ellis, who is trained by Richard Mandella and who has been idle since running third in the Grade II, 1 ¾ miles turf San Juan Capistrano Handicap on April 21, 2013.

Trainer Jeff Mullins will be represented by the speedy Chips All In, who has two graded sprint wins down Santa Anita’s hillside turf on his resume and has been idle since running fourth at 7-2 in the Grade III, 6 ½ furlong turf Daytona Stakes Dec. 28.  He’s owned by Everest, O’Brien, Valdez and partners.

Idle since running fourth in the Grade III San Simeon Stakes April 13, Doug O’Neill’s Pure Tactics will stretch out off of two hillside turf sprints in his third Southern California start.  Owned by Nita Winner, LLC, he has two wins and two seconds from five tries at a mile on turf.