Obviously Takes Off in American 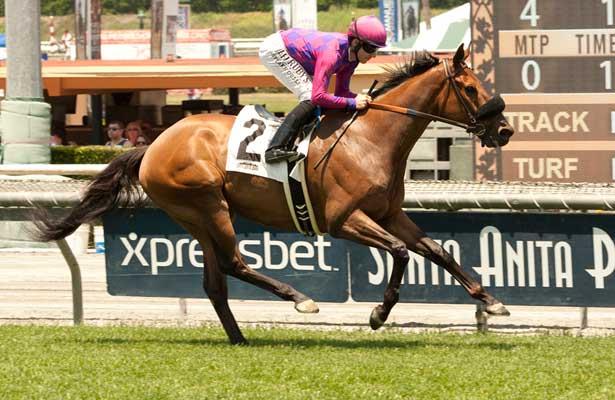 Although pursued relentlessly, comebacking Obviously was not to be denied in Saturday’s Grade III, $100,000 American Stakes at Santa Anita, as Joe Talamo guided the 6-year-old Irish-bred gelding to a resounding 5 ½ length win, providing Phil D’Amato with his first-ever graded victory while getting one mile on grass geared down in 1:33.39.

Off as the heavy 3-5 favorite and idle since running fifth to eventual two-time Horse of the Year Wise Dan in the Grade I Breeders’ Cup Mile at Santa Anita Nov. 2, Obviously went straight to the lead as expected and was pressed to the quarter pole by second choice Silentio through fractions of 22.76, 45.55, 1:08.58 and 1:20.58.

“I knew we were rollin’, but I was surprised with how fast we went,” said Talamo, who won for the seventh time aboard Obviously from 13 tries.  “He fooled me.  I thought we went the three quarters in like 1:09…He’s ageless, he’s truly amazing.  I knew Gary (Stevens, aboard Silentio) was going after me, but you can’t take a hold of this horse.  You just gotta throw his head away and let him roll.

“Believe it or not, he took about four or five breathers today.  When Gary’s horse fell away from us (leaving the quarter pole), he relaxed again and finished up great.”

With the defection of 8-5 morning line favorite Winning Prize and two others, Obviously was the obvious choice with no show wagering offered among a field of four 3-year-olds and up and paid $3.40 and $2.60.

“The fractions were pretty fast but I thought he was going comfortably even though Gary was pushing and shoving on Silentio,” said D’Amato, who, after working for him for 10 years, took over from the recently retired Mike Mitchell as the trainer of record on April 21.  “I knew by the quarter pole we had a good shot…This is very special.  Words can’t describe this.  I’m happy to have my mentor (Mitchell) next to me and win a graded stakes with this horse.  He’s just the barn favorite.

Chips All In, ridden by Tyler Baze, was content to lag far back early and rallied late at the rail to just tag Silentio for second money.  Off at 6-1, Chips All In paid $4.00 to place.