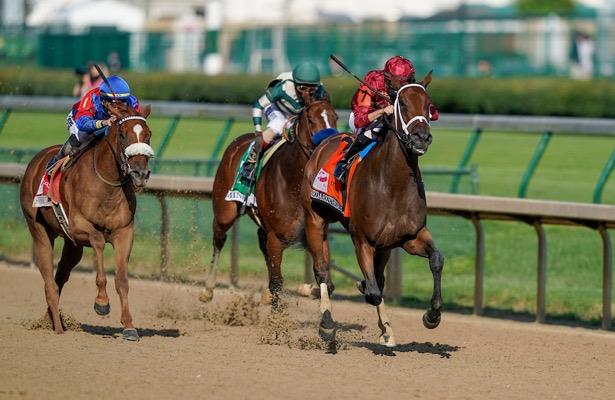 Qatar Racing, Flurry Racing Stables and Big Aut Farms’ Shedaresthedevil will take on older horses for the first time Sunday when she heads a field of six fillies and mares in the 65th running of the $400,000 Spinster Stakes (G1) going 1 1/8 miles on the main track.

Trained by Brad Cox, Shedaresthedevil brings a three-race win streak into the Juddmonte Spinster highlighted by her 15-1 upset in the Kentucky Oaks. Prior to that race, she won the Indiana Oaks (G3) by 5 lengths to mark her second Grade 3 victory of 2020.

Florent Geroux, who has been aboard for Shedaresthedevil’s past three starts, has the call Sunday and will break from post position three. Geroux won the 2016 Juddmonte Spinster on I’m a Chatterbox.

Emollient in 2013 is the most recent 3-year-old to win the Juddmonte Spinster.

Chief among Shedaresthedevil’s challengers is Karen Eggert and Paul Eggert’s Ollie’s Candy, who has raced exclusively in Grade 1 company in 2020.

Trained by John Sadler, the 5-year-old Ollie’s Candy enters the Juddmonte Spinster off a runner-up effort in the Clement L. Hirsch (G1) at Del Mar, a race she won in 2019. Sunday’s race will mark her third venture outside California this year, having posted a runner-up finish in the Apple Blossom (G1) at Oaklawn Park in April and a third, beaten a neck, in the Ogden Phipps (G1) at Belmont in June.

Joel Rosario has the mount and will break from post position two.

*Rating is based on HRN fan votes, which rank the Top Active Horses in training.
Shedaresthedevil Spinster Spinster (2020)