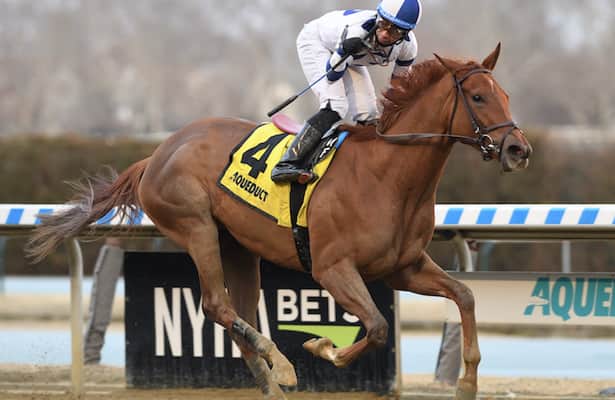 Shahama and Venti Valentine, a respective sixth and 14th in the Grade 1 Kentucky Oaks, will do battle in Saturday’s Grade 2, $250,000 Mother Goose for 3-year-old fillies going 1 1/16 miles at Belmont Park.

Seven of the past 15 editions of the Mother Goose were won by a filly who also raced in that year’s Kentucky Oaks, including Rachel Alexandra [2009] and Untapable [2014] who both captured the Kentucky Oaks-Mother Goose double. This year will see two Kentucky Oaks entrants square off in another important race in the 3-year-old filly division.

KHK Racing’s Shahama will attempt to make Todd Pletcher the standalone winningest trainer in the Mother Goose with seven wins. He is currently on even terms with fellow Hall of Famer D. Wayne Lukas.

The bay daughter of Munnings, and half-sister to dual Eclipse Award-winner Lookin At Lucky, endured a troubled trip in the Kentucky Oaks. She was placed toward the rear of the 14-horse field in the four path around the first turn and was bumped around the five-sixteenths pole, but displayed a late rally to finish 5 1/2 lengths behind the victorious Secret Oath.

Shahama was unbeaten in four starts in the United Arab Emirates, where she was campaigned by Fawzi Nass, capturing the Group 3 UAE Oaks in February at Meydan Racecourse before arriving at Pletcher’s South Florida division the following month.

Pletcher said Shahama exuded talent based off how she trained amongst his other quality sophomore fillies, including multiple graded stakes placed Goddess of Fire, who ran 11th in the Kentucky Oaks.

“It was hard to gauge her racing form. The one thing we felt pretty good about was the way she had trained in company with some of our other horses,” said Pletcher, whose Mother Goose winners include Jersey Girl [1998], Octave [2007], Devil May Care [2010], Buster’s Ready [2011], Off the Tracks [2016] and Zaajel [2021]. “To me, she’s proven she belongs in races like that, and I thought her Oaks was maybe a better race than it looks on paper. She was still closing at the end. She drew an outside post and it took her a little while to get on track. I thought it was a solid effort.”

Flavien Prat will return to the irons aboard Shahama from post 1.

New York-bred Venti Valentine will be in search of her first graded stakes triumph for trainer Jorge Abreu.

Owned by NY Final Furlong Racing Stable and Parkland Thoroughbreds, the Firing Line filly displayed her usual close-to-the-pace tactics in the Oaks rating in third behind a fast pace. After checking several times around the far turn, Venti Valentine had nothing to offer in the stretch run, finishing last-of-14.

Never worse than second in her five starts prior to the Oaks, Venti Valentine has won both of her starts over Big Sandy, capturing her career debut over four next-out winners in September before defeating her Empire State-bred counterparts in the Maid of the Mist the following month at Belmont.

A close second to eventual Grade 1-winner and Oaks-runner-up Nest in the Grade 2 Demoiselle in December at Aqueduct, she made her 2022 debut a victorious one with a seven-length romp in the open-company Busher Invitational before finishing a close second in the Grade 3 Gazelle in April at the Big A.

“She came out of the Oaks in good shape,” Abreu said. “I’m going to cross a line through that race and just regroup with her She’s been doing everything well here. I think one turn will suit her better, not that she can’t go two turns because she proved she can go two turns. But I think the mile and a sixteenth and cutting back in distance will be better for her.”

Jose Ortiz, in pursuit of a third Mother Goose win, will pilot Venti Valentine from post 2.

Trainer Brad Cox will send out Grade 1-winner Juju’s Map, who arrives off a commanding gate-to-wire performance in a 1 1/16-mile allowance optional claimer on the Kentucky Oaks undercard at Churchill Downs, earning an 87 Beyer Speed Figure.

The Albaugh Family Stables-owned dark bay daughter of Liam’s Map has never finished worse than second in five starts, including a 4 1/4-length coup in the Grade 1 Alcibiades at Keeneland en route to a runner-up placing to Champion 2-Year-Old Filly Echo Zulu in the Grade 1 Breeders’ Cup Juvenile Fillies at Del Mar.

Florent Geroux, the pilot in all five starts, retains the mount from post 5.

Klaravich Stables’ Gerrymander will attempt to make amends following a troubled sixth in the Grade 2 Eight Belles on May 6 at Churchill Downs in her 2022 debut.

Gerrymander, by Into Mischief, was a distant second to Echo Zulu in last year’s Grade 1 Frizette at Belmont en route to a score in the Tempted on November 5 over the same surface in the final start of her juvenile season. Gerrymander is trained by four-time Eclipse Award-winner Chad Brown, who won the 2019 Mother Goose with Dunbar Road.

Completing the field is the John Terranova-trained Midnight Stroll, who was a troubled ninth in the Grade 2 Black-Eyed Susan last out on May 20 at Pimlico Race Course. The two-time winning daughter of leading third crop sire Not This Time checked heavily into the first turn and lost position, finishing 13 3/4 lengths behind the victorious Interstatedaydream.

Hall of Famer Javier Castellano will ride from post 3.

The Mother Goose is carded as Race 8 on Saturday’s 10-race program, which has a first post of 1 p.m. Eastern.