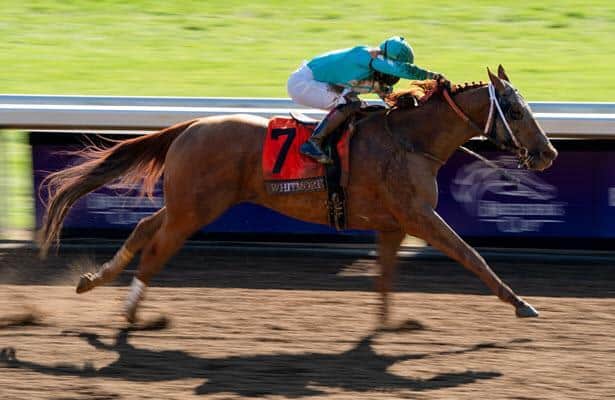 Oaklawn will celebrate the 2020 Breeders’ Cup Sprint (G1) winner and Champion Sprinter on March 19, 2022, with Whitmore Day highlighted by the $200,000 Whitmore Stakes.

In another move by Oaklawn to honor Whitmore, the Count Fleet barn, which was Whitmore’s winter home for six years, will be renamed the Whitmore barn.

Related: Retired champion Whitmore 'wanted it,' but what's next?

“Whitmore was truly Oaklawn’s horse and we’re excited to honor his accomplishments with Whitmore Day and the Whitmore Stakes next March,” track president Louis Cella said. “It is rare for a horse to compete at the highest level for six straight years and Whitmore did just that, never backing down from a fight. This is why he has such a large following of fans not only in Arkansas but nationwide.”

Whitmore Day will also feature an appearance by the Champion, Whitmore T-shirts, and each of the first 5,000 fans will receive a commemorative Whitmore baseball card.

The now 8-year-old Whitmore won an Oaklawn allowance race in January 2016 in his 3-year-old debut and went on to place in the track’s top 3-year-old stakes, which earned him a spot in that year’s Kentucky Derby (G1). He did not race again until December 2016 when he won a six-furlong allowance race at Aqueduct, setting the stage for him to become one of the top sprinters in North America.

“Oaklawn has always been my home track, and it was Whitmore’s home track, so it’s a huge honor to have a stakes race named for him here,” trainer Ron Moquett said. “He was a hard-knocking horse that a lot of people could easily root for whether they put a bet on him or not. The amount of support we have received since his retirement has been overwhelming.”