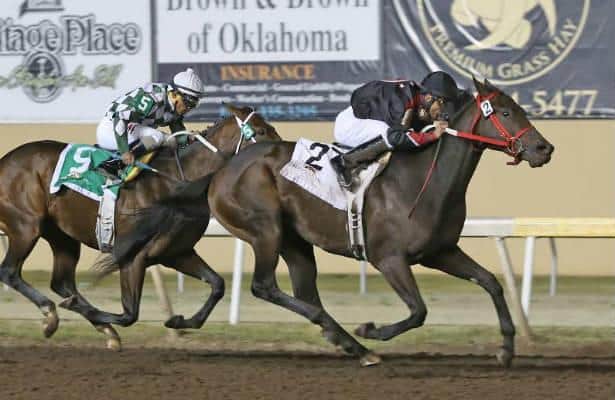 Millionaire Shotgun Kowboy has recorded two workouts this season at Oaklawn Park, including a 5-furlong move Saturday morning in preparation for his 7-year-old debut.

“Got one more work and then we’ll look for a spot for him to go,” breeder/owner/trainer C.R. Trout said.

Shotgun Kowboy eclipsed $1 million in career earnings with an allowance victory last February at Oaklawn and won the $200,000 Lone Star Park Handicap (G3) May 27 at Lone Star Park. The gelding went off form in his final two starts last year, finishing fifth in the $150,000 Zia Park Championship Handicap Nov. 21 at Zia Park and seventh in the $75,000 Jeffrey A. Hawk Memorial Stakes Dec. 16 at Remington Park.

“We don’t throw him to the wolves as much as we used to,” Trout said. “We’re just going to pick and choose our spots. The last two times on off tracks … he’s just got now where he won’t run on off tracks. We’ll look for a spot where the track’s good.”

Shotgun Kowboy, an Oklahoma-bred son of Kodiak Kowboy, has amassed $1,375,501 in career earnings after winning 13 of 33 starts.

Asked if 2019 will be Shotgun Kowboy’s final year to race, Trout said he’ll leave that up to the horse.

“He’s never had a dime’s worth of trouble anywhere, feet, ankles, knees, nothing,” Trout said. “I’ll let him tell us. When he does, we’ll make a stable pony out of him.”