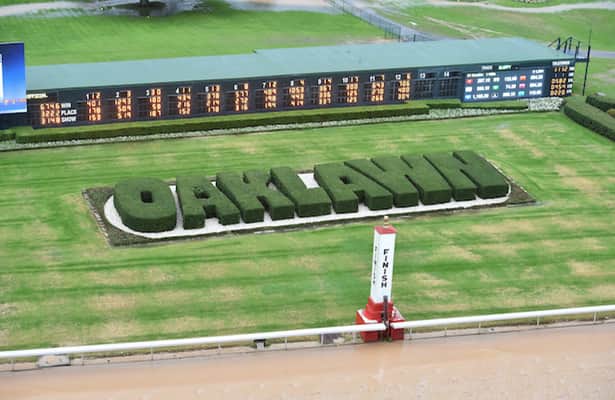 Although it doesn’t begin until Friday, Dec. 9, the 2022-2023 Oaklawn racing season already has broken at least two records. The Hot Springs, Ark., track will offer the greatest number of stakes races and the highest stakes purses in its history.

Nine races have been added to the stakes schedule for the 68-day season, bringing the total to 45. Total purses offered for the stakes program have increased by $1.45 million to an all-time high of $13.75 million. The overall purse distribution for the season is projected to exceed $50 million, also a record.

The stakes schedule once again is highlighted by the $1.25 million Arkansas Derby (G1) April 1, along with three $1 million stakes races – the Rebel Stakes (G2) on Feb. 25, the Apple Blossom Handicap (G1) on April 15, and the Oaklawn Handicap (G2) on April 22.

This is the second consecutive season Oaklawn is opening in December. Oaklawn president Louis Cella said the expansion of the stakes program is made possible by the early start. “We were pleased with how December racing was received last year, by both racing fans and horsemen,” Cella said. “Now, we’re going to use our stakes schedule to build on that momentum.”

Three of the new stakes races are scheduled for December, and the other six will take place during the final weeks of the season:

“One of the reasons Oaklawn has been successful for more than a century is because of where we are located,” Oaklawn general manager Wayne Smith said. “Tourism is a major industry in our area, and Oaklawn is proud to be the state’s top tourism attraction. We wanted some stakes with names synonymous with Oaklawn’s hometown and the surrounding area.”

Oaklawn’s rich 3-year-old series, offering points toward eligibility in the Kentucky Derby, begins Jan. 1, with the $250,000 Smarty Jones Stakes and continues with the $750,000 Southwest Stakes (G3) on Jan. 28, and the Rebel Stakes (G2) on Feb. 25 before culminating with the April 1 Arkansas Derby (G1).