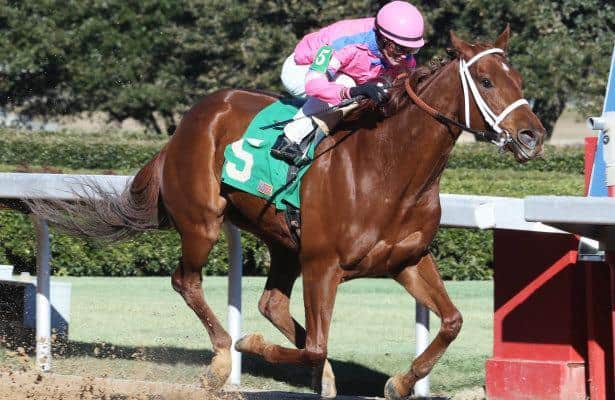 Shortly before trainer Tom Van Berg would saddle his first starter in a decade Jan. 12 at Oaklawn, paddock analyst Nancy Holthus was a few feet away preparing to deliver insight on the fifth race, a third-level allowance/optional claiming sprint for older fillies and mares.

What unfolded next was truly a profound moment.

Van Berg and Holthus – separated by a wooden partition in stalls 5 and 12 – inched toward the back of the compartments and pressed a hand against the plexiglass stripped near its top, a show of love for the man who would watch this race from the heavens.

The man, of course, was Hall of Fame trainer Jack Van Berg, father of Tom, trusted friend of Nancy and one of most iconic figures in Thoroughbred history.

The horse was Profound Moment, who represented the first starter for Team Van Berg since Jack’s death Dec. 27 in Little Rock, Ark., at the age of 81.

Holthus had known Van Berg for more than 20 years, helped plan his funeral and spoke at his celebration of life ceremony Jan. 8 at the Hot Springs Convention Center.

“Just seeing that horse walk in the paddock with the purple and gold blanket, my heart wound up in my throat,” Holthus said. “Tom was literally saddling behind me, and I kind of turned around and put my hand on the glass and just kind of started tearing up. He came over and put his hand on the glass. It was just one of those moments where we were kind of telling each other, you know, Jack’s here.”

Many assembled for a winner’s circle photo following that fifth race pointed to the sky to recognize the aptly named Profound Moment’s front-running one-length victory under Alex Birzer.

“Unbelievable,” said Tom Van Berg, who hadn’t started a horse since Jan. 1, 2008. “I think that was 100 percent the big guy above still working. He carried her the last eighth of a mile home.”

Tom Van Berg, 48, won the $100,000 Razorback Handicap (G3) with Sonic West at the 2004 Oaklawn meeting, but quit training four years later to help raise a family. When his father’s health began declining last summer, Van Berg gradually moved back into a position he held from 1999-2008, when he won 158 races as a trainer of record.

Approximately 30 horses at Oaklawn, most previously with his father, are now under Tom Van Berg’s care.

Regarding Profound Moment (2 for 2 at the 2017 Oaklawn meeting for Jack Van Berg), Tom Van Berg said there were no nerves – until he saw a misty-eyed Holthus in the other stall.

What followed was a profound moment.

Mason on the Move

Consistency has trainer Ingrid Mason atop the trainer standings after the first four days of racing. Mason has saddled one winner each day to lead Hall of Famer D. Wayne Lukas, 2017 runner-up Robertino Diodoro and Jinks Fires of Hot Springs, who all have three victories.

“You know, it’s all luck,” Mason said with a laugh. “It’s just finding the right races for your horses and horses liking the track, that sort of thing. We all try to do the same thing every year.”

Among the most successful female trainers in Oaklawn history, Mason has 75 career victories in Hot Springs since 2010, when she compiled a sparkling 9-1-2 mark from 21 starts.

Mason said plans are pending for Marquee Miss following a fifth-place finish in an allowance/optional claiming sprint in her 5-year-old debut Jan. 12.

Rapid Dial, who won his first two career starts at the 2017 Oaklawn meeting, is a “few works away” from making his 4-year-old debut, Mason said. He suffered his first career loss in the $250,000 Pat Day Mile (G3) last May at Churchill Downs and is unraced since a fourth-place finish in a second-level allowance/optional claiming sprint July 8 at Arlington Park.

“He bled a little bit and we just gave him a break,” Mason said.

Rapid Dial has five published workouts at Oaklawn since Dec. 17 and is pointing toward an allowance sprint, said Mason, who has 30 horses on the grounds.

The track reopened for training at its normal time Saturday (7 a.m., Central) after being closed the previous four days because of arctic temperatures. … Five-time defending Oaklawn riding champion Ricardo Santana Jr. (0 for 3 at the meeting) is named on seven horses Saturday, his first full day at the meet. Santana was suspended for the first three days of the meet (stemming from the 2017 Oaklawn season), but substituted two of the days by riding Untrapped in the $125,000 Fifth Season Stakes Jan. 12 and Terra Promessa in last Saturday’s $125,000 Pippin Stakes. He also rode Combatant in Monday’s $150,000 Smarty Jones Stakes. Santana served his first day last Sunday and was credited with his final two days – Thursday and Friday – despite Oaklawn canceling both cards because of severe cold. “He’s good to go,” state steward Stan Bowker said. … Sunday’s fifth race, a second-level allowance sprint for Arkansas-bred fillies and mares, is a prep for the $100,000 Downthedustyroad Breeders’ Stakes Feb. 24. The field includes two-time Downthedustyroad champion Easter Indy; Ministry, winner of the $100,000 Rainbow Miss Stakes last year at Oaklawn; and 5-2 program favorite Dutch Parrot, who hasn’t started since finishing fifth in the $200,000 Indiana Oaks (G3) July 15 at Indiana Grand. The Downthedustyroad is a 6-furlong race restricted to Arkansas-bred fillies and mares. … Pryor, winless in two career starts, is scheduled to make his 3-year-old debut in Sunday’s seventh race. Owner Alex Lieblong, chairman of the Arkansas Racing Commission, named the Paynter colt after the late comedian Richard Pryor. The dam of Pryor is Awesome Humor. Pryor’s trainer, Ron Moquett of Hot Springs, has 199 career victories at Oaklawn. … Eternal Bling, a 3-year-old full sister to multiple stakes winner Texas Bling, is scheduled to make her career debut in Sunday’s ninth race for trainer Danele Durham, who also campaigned Texas Bling. Durham said the dam of both horses, Anythingmore, “hemorrhaged” giving birth to Eternal Bling and died, adding “she received a nurse mare immediately and had a normal upbringing.” Also entered in the 6-furlong race is Tyfosha, a $410,000 OBS March 2-year-old in training purchase who is scheduled to make her 2018 debut for trainer Doug O’Neill. Previously based in Southern California, Tyfosha has finished second in all three career starts, the last coming Aug. 19 at Del Mar to Moonshine Memories, a finalist for champion 2-year-old filly.