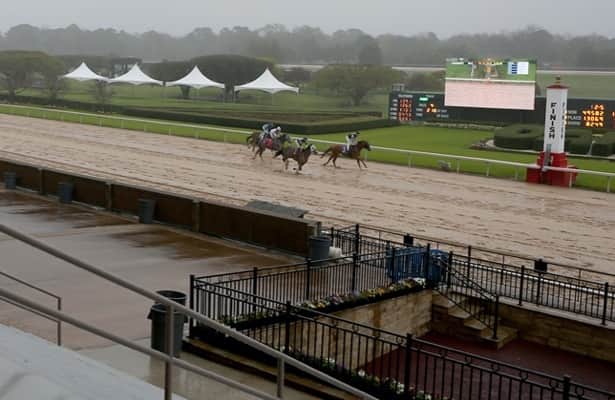 With its schedule already as hamstrung by a winter storm as the racetrack itself, Oaklawn Park will cancel Thursday through Sunday’s racing slates, totaling four more missed days due to inclement weather, the track announced through a social media post on Monday.

According to the post, all stakes races scheduled for the canceled dates will be moved to Feb. 25-28.

Due to continued inclement weather predicted for the remainder of this week, Oaklawn, with the permission of the stewards, will cancel four days of racing this Thursday, Feb. 18 thru Sunday, Feb. 21. All 5 stakes move to the following week. More details will follow. pic.twitter.com/oyr6z4lZiL

The track had already canceled racing for last Friday through Monday, which had moved four more stakes races to the days that are newly canceled, including the Southwest Stakes (G3) and the Razorback Handicap (G3).

"There's just too much with the freezing temperatures plus some more snow predicted," Oaklawn general manager Wayne Smith told HRN on Monday night. "The temperatures weren't getting any higher. It just continued to make sense that we look at at least Thursday and Friday and that just bled into Saturday."

Trainer Brad Cox texted "No sir" when asked if he had any new plans for his champions Essential Quality, whose 3-year-old debut in the Southwest has been postponed twice, and Monomoy Girl, who was expected to make her first start as a 6-year-old in the Bayakoa Stakes (G3).

Steve Asmussen said his two-time Grade 1 winner Jackie's Warrior will stay in the Southwest Stakes, which he anticipates will be run Saturday, Feb. 27.

"Everyone is OK," he said in a text Tuesday morning. "We are not accustomed to this kind of weather."

A total of five stakes races will now be run next weekend due to the cancellations. The Southwest is a Kentucky Derby points prep that apparently will be only two weeks before the Rebel (G2), also a race for qualifying points.

"We'll have a little more coming out here in the next couple days on how the dates are going to be shifted in terms of when we're going to run what and on what day," Smith said.

With a sub-zero overnight low forecast for Monday night and another winter storm warning for Tuesday through Thursday, training at Oaklawn Park is on a wait-and-see basis.

"As soon as we get out on the track we'll be able to train for sure," Smith said. "We just don't have that understanding at this point. I mean we're not supposed to get out of the 20s until Friday."