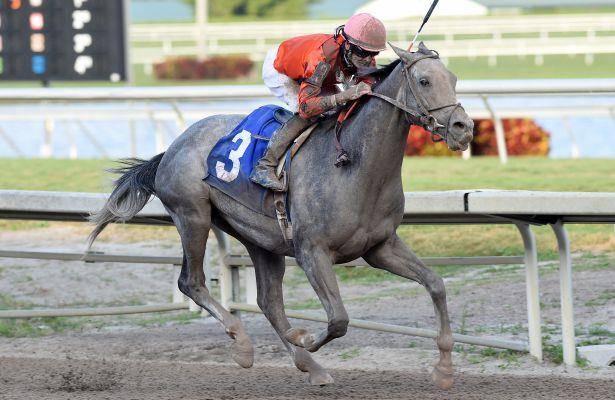 Cherry Wine will run in the Grade 2 $900,000 Rebel Stakes at Oaklawn Saturday in the colors of William Pacella and Frank L. Jones, Jr. Although this will be the son of Paddy O' Prado's initial foray into stakes competition, his two-race winning streak by a combined 15 1/4 lengths is inspiring Kentucky Derby dreams.

“That’s everyone’s dream in this business in Kentucky,” said Eclipse Award winning trainer Dale Romans, who is stuck in Florida battling a virus he contracted in Dubai when running 2015 Travers winner Keen Ice there recently. “Frank is like a father to me. To get him to the Derby would be the biggest accomplishment of my career.”

In addition to the $900,000 Rebel purse, there are Kentucky Derby qualifying points (50-20-10-5) up for the taking by the first through fourth place finishers, and Cherry Wine needs to put some into his column on the leaderboard to keep moving toward Louisville on the first Saturday in May.

Jones serves on the Kentucky Horse Racing Commission and is a vice president in the Kentucky HBPA, as is Romans. The Louisville businessman has had only two trainers over his many years as an owner and breeder- Dale and his dad, Jerry Romans- and he has known Dale since his birth. Although he and Dale Romans did team on Jones' homebred 2009 Breeders' Cup Juvenile Turf winner Tapitsfly, he has never had a Kentucky Derby starter.

“This looks like he's going to be their best colt,” Romans said of Jones and Pacella, who is from Chicago and owned the multiple graded stakes-winning filly C.S. Silk, also a Romans trainee.

Cherry Wine didn't graduate from the maiden ranks until his fifth start, when all of the lights came on.

“I think it was all mental. He was physically always a nice horse. He just hadn’t figured out how to run. His father didn’t break his maiden until February of his 3-year-old year. Some horses take a while to come around. Some horses have the talent but don’t have the drive to compete just yet. Then when they figure out why they’re there and what they’re trying to do, they become better horses. And that’s what happened to him," said his trainer.

After arriving from South Florida on Thursday afternoon, Cherry Wine went out for a morning gallop under his regular exercise rider Faustino Aguillar. The colt will break from post #11 under regular rider Cory Lanerie in the Rebel.

“It might be the most even fields of a Derby prep we’ve had this year. It looks like a strong bunch. I sure would rather have had the five-hole, but we’ll see what happens from the outside. I have the best rider in the country on him and he should be able to figure out what to do," Romans said.

Charles E. Fipke's Spike's Shirl is jumping up in class from the $50,000 optional claiming ranks to Grade 2 company at 30-1 in the morning line, the colt is the co-longest shot in the field of 14. But beware. Trainer Dallas Stewart has a knack for getting his charges to outrun their odds.

Stewart, who was an assistant to D. Wayne Lukas and ran the Hall of Famer's division here earlier in his career, won the 2006 G1 Kentucky Oaks with Lemons Forever at 47-1 and the 2015 G1 Ballerina with her daughter and longshot Unbridled Forever. Stewart finished second in the 2013 and 2014 Kentucky Derby with Golden Soul and Commanding Curve, respectively, at huge odds and Tale of Verve was the runner-up in last year's G1 Preakness Stakes and another who defied the oddsmakers.

Fipke owned Lemons Forever, Unbridled Forever and Golden Soul, and now the connections are hoping that Spike's Shirl can be another pleasant surprise.

“He's a nice horse,” said Stewart by phone from his New Orleans base. “He got a little sick this winter but he bounced back for me and had a nice second last out at the Fair Grounds going long. We're building with him and we're moving on. I know this spot is a challenging one, but I also know the distance (1 1/6 miles) is within his grasp. So we'll see where we're at.”

Assistant trainer Bentley Combs and jockey Jesus Castanon, who will ride him in the Rebel, accompanied the horse here from New Orleans for their late Thursday afternoon arrival. Castanon took the son of champion Sprinter Speightstown out Friday morning before the break to familiarize him with the track during a morning gallop but the rider needed no introduction to Oaklawn.

“I was part of the colony here the last couple of years so I really know this track and that is an advantage,” said Castanon, the winner of 16 races here in 2015. This is one of those races where you've got to be close and you can't give up too much ground.”

“He went really good over the track today, perfect," said the jockey. “He felt real good under me. He was floating went he went around. He loves the track.”

“I think he's coming into this race really well. It's a salty race but this horse is coming into his own and I think he'll run real. You never know what's going to happen when you have fourteen in there, that's horse racing, but I think a full field will make him better. In his last couple of races when horses came up with him he fought on,” said Combs.

Spike's Shirl has just a maiden win to his credit and thus doesn't have any Kentucky Derby qualifying points in his column yet so his connections would like to remedy that.

“That's part of it and we'll see where we're at,” said Stewart.

“Hall of Fame trainer Bob Baffert's Cupid continued his forward progress on Friday and assistant trainer Jimmy Barnes, who will saddle the horse Saturday, reported him as A-OK following his morning 1 1/2 miles gallop and paddock schooling the day before.

Martin Garcia, who has been aboard for all three of the son of Tapit's races, is traveling to Hot Springs to ride him in the Rebel. Cupid is owned by the connections of Coolmore, the renowned international racing and breeding operation, and is one of about five horses in their contingent with Baffert.

Incidentally, there are four sons of superior sire Tapit in the 14-horse Rebel field. Including Cupid, they are Creator, Madtap, and Gray Sky and the foursome is all gray or roan in coat color, just like Tapit.

Suddenbreakingnews was a last-to-first winner of the $500,000 Southwest Stakes (G3) Feb. 15 at Oaklawn in his last start.

Keith noted “west Texas” will be “well-represented” in the Rebel because Southwest winner Suddenbreakingnews is owned by Samuel F. Henderson of Odessa and Keith is from Hobbs, N.M.

“Hobbs is only seven miles from the state line,” Keith said with a laugh. “That’s technically west Texas.”

Keith said he and Henderson have never met.

Fleming said the foursome all schooled Thursday, and “so far, all is good.”