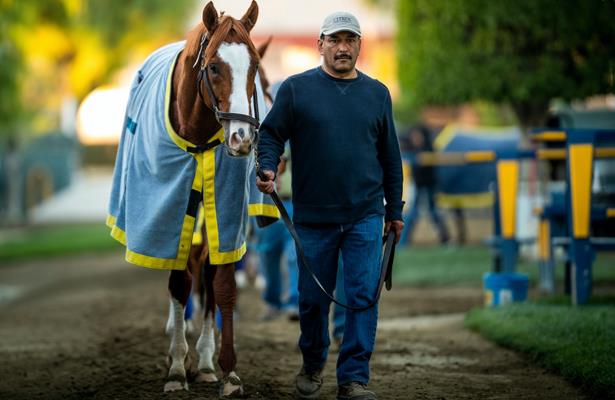 The afternoon before racing halted at Santa Anita Park, trainer Bob Baffert had entered Improbable for his 2020 debut in the Santana Mile, a $75,000 stakes in which he figured to go as the odds-on favorite.

“It was pretty disappointing they pulled the plug on us here,” Baffert said. “He was sitting on a big race.”

That event could have prepped Improbable for a trip to the May 2 Oaklawn Handicap (G2). Instead, given a lack of other spots to try, the 4-year-old son of City Zip shipped to Arkansas coming off the layoff as a prominent member of Saturday’s $150,000 Oaklawn Mile field.

Campaigned by WinStar Farm, China Horse Club and SF Racing, Improbable is one of three millionaires, along with Tom’s d’Etat and Mr. Money, in a stacked group of 14 set to go postward at 5:43 p.m. ET in the ninth race.

“He’s been working the best he ever has, but it’s going to be a tough race,” Baffert said. “Oaklawn Park — that’s where all the good horses are now, that and Gulfstream. You’d better have a nice horse when you go in there. You need to have your ‘A’ string.”

Breezing at Santa Anita Park, Improbable logged five straight bullet works before completing preparations Sunday with a five-furlong drill in 1:01. More important, perhaps, is the type of training that doesn’t show up on the work tab.

In his last trip to Oaklawn Park for the 2019 Arkansas Derby (G1), Improbable was reluctant to load, acted up in the gate and, as the rail horse, spent plenty of time in there. He still managed to run second by a length to Omaha Beach despite expending the extra pre-race energy.

“In California, he’s never acted up at the gate,” Baffert said. “He only does it on the road.

“… The break will be very important.”

Baffert hopes extra schooling and the added maturity of an older horse help his colt overcome those issues Saturday. Improbable will need all the sharpness he can get from the gate given he’ll exit post 14 under jockey Drayden Van Dyke.

A chestnut with a white blaze, Improbable received his share of comparisons to the 2018 Triple Crown winner Justify when he burst on to the scene with a 3-for-3 start to his career, including a victory in the Los Alamitos Futurity (G1). In deeper waters at age 3, the winner’s circle proved tougher to find — it wasn't until the Aug. 25 Shared Belief Stakes at a mile that Improbable prevailed again.

He finished the season with finishes of fourth in the Pennsylvania Derby (G1) and fifth in the Breeders’ Cup Dirt Mile.

“I think he just got a little bit sour or whatever, but he’s training really well right now,” Baffert said.

Improbable is being housed in the familiar D. Wayne Lukas barn. And with a nice performance, it’s possible he'll stay there for the Oaklawn Handicap, the 1 1/8-mile race worth $600,000 on May 2.

“Horses, the older they get, the farther they can run when they mature,” said Baffert, who has saddled Improbable for races up to 1 1/4 miles but arguably saw him run better going a tick shorter last season.

“Like Bayern — I thought he was a one-turn kind of horse, and he ends up winning the Breeders’ Cup Classic in pretty impressive fashion. Sometimes that brilliant speed will carry them.”