Grade 1 assignment in Oaklawn 'Cap hero By My Standards' plans 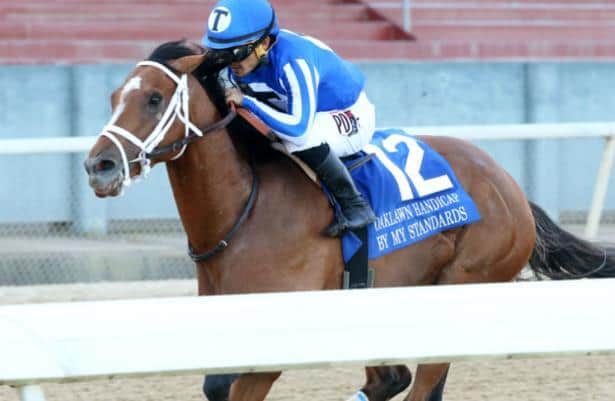 Had By My Standards’ run to open 2020 come in almost any other season, trainer Bret Calhoun’s decision on where to run next would be simple off a stirring victory in Saturday’s Oaklawn Handicap (G2).

The 4-year-old Goldencents colt ships to Churchill Downs later this month, and among the stakes offerings anticipated there into the summer is the Stephen Foster, traditionally a “Win and You’re In” toward the Breeders’ Cup Classic.

But while the Foster ran as a Grade 1 race from 2002 to 2018, it was downgraded in 2019. And Calhoun figures it’s time By My Standards gets another shot at racing’s highest level.

“I’ve got to find a Grade 1 for him somewhere to try to win,” the trainer said Sunday. “At the same time, I want to keep him fresh to have him peak at the Breeders’ Cup. I don’t know where and when yet, but the more I can run him out of his own stall at Churchill will be beneficial. We definitely need to pursue a Grade 1 with him.”

For now, the only such race for older horses on the stakes schedule is the June 6 Gold Cup at Santa Anita (G1) going 1 1/4 miles. Calhoun said “that’s a race you have to take a hard look at,” but he’ll also await any options that may open up in, for instance, New York as a resumption of racing is sought at Belmont Park amid the COVID-19 pandemic.

Running for Allied Racing, By My Standards improved to 3-for-3 this year once he overtook pace-setting Warrior’s Charge and ran to a 1 3/4-length victory in a loaded edition of the Oaklawn Handicap. Mr Freeze, Tacitus and Tax — all graded winners in their own rights — were next across the wire in a field of 13.

“I definitely think he proved himself yesterday,” said Calhoun, whose charge earned a career-best 103 Beyer Speed Figure on Saturday.”That race and a lot of the races at Oaklawn the last month or so have been extremely deep in numbers and quality. Everybody will have a lot more respect for a lot of those horses coming out of those races. It was definitely a showcase race for him.”

By My Standards had already coasted to an allowance optional claiming victory off the bench before cruising in Fair Grounds’ New Orleans Classic (G2). With this start to the season, he’s making up for lost time after missing the second half of 2019 because of lingering foot problems.

Earlier on as a 3-year-old, By My Standards went from maiden winner to a Louisiana Derby (G2) upsetter. Sharp morning works put him on the radar, then, for handicappers as a wise guy Kentucky Derby selection.

“He’s grown up and become a lot stronger horse,” Calhoun said. “But he was kind of the buzz horse going into the Derby, and he had me pretty optimistic even though we were dealing with some feet issues. Then it rained and the track and everything changed. I lost some of that optimism.

By My Standards was shuffled back at the start of a sloppy 2019 Kentucky Derby, eventually being placed 11th. Given a fast track to run over this weekend, he fared much better on the first Saturday in May.