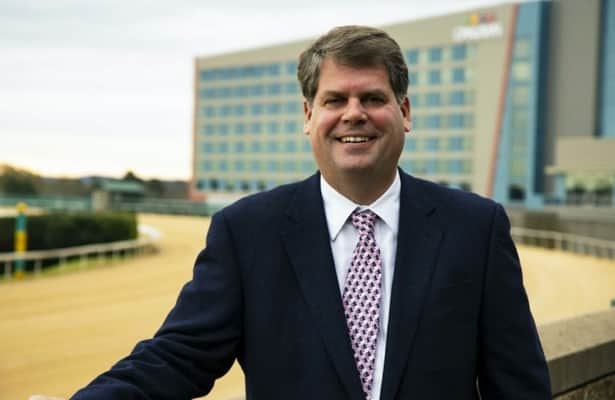 Louis Cella is overseeing a period of unprecedented growth after succeeding his father, Charles, as president of Oaklawn Park in Hot Springs, Ark., in December 2017. Oaklawn is adding a 200-room hotel that will overlook the racing and a multi-purpose events center.

The Arkansas Democrat-Gazette honored you as its Sportsman of the Year. What did that mean to you?

Well, it’s humbling, and it’s a tremendous honor, and it came out of the blue. It’s a group effort. Our team at Oaklawn really did a remarkable, remarkable job during not only our live season but when we spilled over into our summer season. They didn’t let their guard down.

Many other racing jurisdictions shut down when the pandemic first hit. What led you to persevere?

We have an obligation not only to racing but to the folks that are there at the track. At that time of year there about 1,000 employees on the backstretch. We’ve got 1,500 of the very finest Thoroughbreds in America. We’ve got our own employees. We’ve got an obligation to do what’s right. We can’t just turn the lights off and shut the door and say, ‘Go home.’ We have to do what’s right for them, and that’s what really swayed us to continue going.

Do you believe you demonstrated that it is possible to work safely despite the pandemic?

Well, you can. Now you’re not allowed to cheat. We’re stringent. We have a strictly enforced face-mask rule in place. We literally have the face-mask police. If they’re down, you will get reprimanded or you will get thrown off the track, plain and simple. If you’re not social distancing, you’re thrown off the track, plain and simple. If you do that and take this as serious as it is, it will work. We proved that, and we’re about to start our 2021 season, and we’ve implemented the same protocols with even a few more twists that we learned over the summer from other tracks and other professional sports. It is remarkable that, during our season last year, we did not have a single positive case. Not one.

You committed a great deal of private investment to expansion. Why do you think that is important?

It’s vitally important for the region and very important for Oaklawn to expand in our excellence and our racing. We’re fortunate enough to have instant racing, and that evolved into electronic games of skill, which evolved into a constitutional amendment for games of chance. As we grow, our purses will grow. It a vision I have for Oaklawn to really make it a one-of-a-kind racing and gaming resort. For that we have a hotel that is mostly complete that sits right on the first turn. Half of the rooms are overlooking the track. We have a new restaurant called The Bugler, and we have other aspects that focus on racing. I think racing fans not just from the region but nationally will really embrace it.

It sounds as though you have the conviction that racing can still sell, at least in Arkansas.

Firmly believe in it. We’ve proven it year in and year out. We are unique in a couple of ways. We have a great relationship with our local horseman’s association, the HBPA, with Bill Walmsley heading that. We have a great relationship with our state racing commission, with chairman Alex Lieblong heading that. It’s not like we don’t have differences of opinion. We do. But we all get in a room, we don’t raise our voices, and we discuss and we’re partners. I’ve advocated since I’ve been around no agendas; put those at the door. If racing is going to survive — and I certainly believe it will and can — everyone has to get along. And if you don’t get along, racing won’t survive. And we’re seeing that nationally. But in Arkansas, we do get along. We all believe that racing is a great sport and a viable sport, and the proof is in the pudding. We’re going to offer $700,000 a day in purses. It’s the highest purse rate in America at this time of year, and it’s a beacon — a shining star for racing — as it has been for a number of years.

Is it your belief that if you show them the money, quality horses will come?

It’s more than that. Yes, you have to have purses, but you also have to have facilities. We put an awful lot of money back into our backstretch area. We just completed our eighth new barn. There is not a track in America that is building one new barn, much less eight. We put money back into our grandstand. We just put in tons of new air-conditioning. We put in new fire-safety protocols. We put money into landscaping in the infield. From a horseman’s perspective Oaklawn does something that no other track does. We pick up our racetrack every single year, and it’s a lot of dirt. What that does is it lets us inspect the base every year, take care of it if it’s a problem, remix it to our formula and then put it back down.

You have built a nice fan base. How do you connect with fans under normal circumstances?

It’s all about the fans. We have a free gate. We took over catering a number of years ago. It doesn’t make economic sense, but it lets us keep our food and beverage and concession prices very low. A beer is six bucks. You can’t get that at a sporting event anywhere in America. So our fans know they are going to have a very good time in a very comfortable environment. It’s a fun atmosphere. We sell fun. That’s what we’re doing. If we sell fun, the sport will follow because that’s part of the fun. We really focus on family. Come in the infield, look at the horses, get a hot dog, get a Coke and enjoy the fun of the sport of horse racing because we know you will come back.

What is your approach to Lasix for the upcoming meet and beyond?

All of our stakes that have points for the Derby and the Oaks are Lasix-free. Our horsemen see where everything is headed, so they agreed to a 50 percent reduction in dosage (for other races), a very reasonable approach. In addition, we are prohibiting Clenbuterol, and we’re testing through hair follicles. We’re requiring a safety cushion crop, no other crops permitted. Shock-wave therapy, you see that in Kentucky, you see that elsewhere. We’ve banned it. Not even a piece of equipment is permitted on property during the season.

What is your opinion of the Horseracing Integrity and Safety Act?

In Arkansas I think our regulators do a very good job of hands-on approach, and our horsemen are very respectful and responsible. In Arkansas I’m not so sure a federal government bureaucracy can do much more than we’re already doing, because we’re doing quite a bit. Having said that, I think other jurisdictions will benefit greatly from it because, frankly, they’re not doing that great a job.

How important is it to build public confidence in the integrity of racing?

We don’t believe necessarily in the hay, oats and water program, a very strict alliance with that. I have talked to an awful lot of trainers who talk about the therapeutic medications that actually do work. Having said that, we do believe in the highest integrity of racing. All of our tests are super tests. They are going to pick up everything. If a horseman tries to cheat, we’ll find it. They know we have zero tolerance.

Bob Baffert, who is as high profile as you can get, had some positive test results at your track last year. Did that trouble you?

Of course. But there were mitigating circumstances. I know Bob, and I am quite certain it was not an intentional act.

The fact that Oaklawn has been a family operation for so long, is that more beneficial than disadvantageous?

You have elevated Oaklawn’s profile in recent years. Have you reached the point where you rank among the major tracks in North America?

Well, I don’t think there is a ranking part to this. Proof is in the pudding. Our horses have gone on to do great things. Smarty Jones, American Pharoah, Zenyatta, Whitmore — we have horses that have gone through our program and won the Triple Crown, the Kentucky Derby, all the Triple Crown races, all the Breeders’ Cup races. That alone is a testament to the quality.