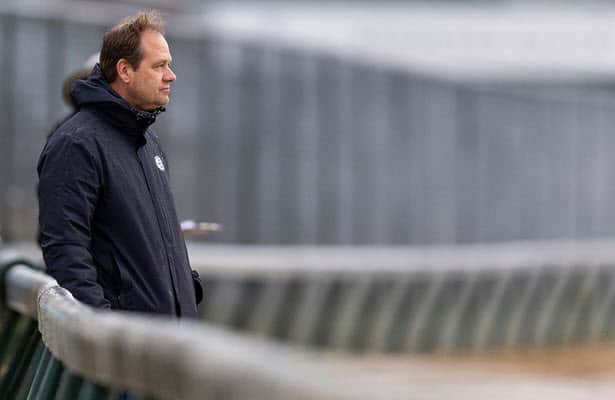 The footnotes from the Kentucky Derby were tersely written by Equibase.

“Happy Jack was slow into stride and passed only tiring foes.”

That’s it. Nothing more to see here. That being the case, what is he doing coming back two weeks after that 14th-place disappointment to race Saturday in the Preakness Stakes?

“We were already an outsider,” trainer Doug O’Neill told reporters Friday morning about the Derby experience. “I was pretty happy with the way he ran after all that.”

All what? Well, there was more to Happy Jack’s trip than met the oral history of the official race chart.

First, he got his tail stuck in the rear doors of the starting gate before the race. Happy Jack was backed out and reloaded, but he did not hide the feeling that he wanted to be anywhere other than post 2 at Churchill Downs.

Then, in the second turn, he was making up ground along the rail only to have jockey Rafael Bejarano downshift when he ran up on Summer Is Tomorrow’s retreat from an insane early pace.

“I think anytime you break out of the ‘2’ hole (with) 20 horses, you’re a little bit up against it,” O’Neill said. “Rafael Bejarano, who I think is one of the best riders in the world, was very complimentary with the (tail) mishap, and he said he never stopped trying.”

Nevertheless, the chart said Happy Jack finished 19 lengths up the track at Churchill Downs. The deep-closing colt came to Pimlico as a 30-1 morning-line long shot for the Preakness. Armagnac, whom Happy Jack beat by a neck for third place last month in the Santa Anita Derby (G1), arrived from California carrying expected odds of 12-1. Go figure, right?

“Armagnac is coming off a nice allowance win with big figures,” O’Neill said. “Happy Jack is coming off running 14th in the Derby. I can see that. On sheer numbers, Armagnac looks like he should be one of the favorites, but Happy Jack I think has got a lot more than what he has shown. We’re hoping to see that Saturday.”

O’Neill has done a lot of tinkering with the colt who was sired by 2013 Preakness winner Oxbow. Because Bejarano is riding at Churchill Downs rather than coming to Baltimore, Tyler Gaffalione will be Happy Jack’s third jockey in as many races.

“He had that little mishap in the gate before (the Derby), but he seemed like he handled everything else very well that day regarding the crowd and all the fans,” Gaffalione said at Pimlico, where he brought a 14-for-49 hot streak into Friday’s races. “He was making a nice little (late) run when the horse kind of backed up in his face. You just kind of draw a line through that one.”

O’Neill also is adding blinkers, continuing a pattern of alternating them on and off for the fifth race in a row. Happy Jack had them on when he won his debut, a six-furlong sprint in January. He since has lost his last four starts by an average of 17 lengths.

“We’re putting the blinkers on hopefully to be a little bit more forwardly placed,” O’Neill said. “We had them on in his debut, where he won. I purposely put them on there just thinking he was a two-turn horse sprinting the first time out. It worked well. As we started going longer, I felt like he was in the bridle a little bit too early. So we took them off.”

After that, O’Neill admitted it became a case of trial and error.

“It is such an inexact science,” he said. “He’s matured enough that he won’t have any kind of accelerator stuck or have trouble navigating the distance of the race.”

Gaffalione was confident the addition of blinkers would help Happy Jack chase a pace that could be set by Wood Memorial (G2) runner-up Early Voting and perhaps Kentucky Derby runner-up Epicenter. And almost certainly not as fast as it was at Churchill Downs.

“I’ve been able to go back and watch a few of his replays,” Gaffalione said. “It seems like he shows a little more interest when he has the blinkers on. You just don’t want to get too far back. It seems like he’s more of a one-pace kind of horse. I’ll just try and get him into a good rhythm and have him as close as I can as easy as I can.”

If the jockey and equipment changes work out, and if the decision to come right back for the Preakness proves wise, Gaffalione would be looking at his second victory in this race. O’Neill would have his fourth.

“I think the race definitely looks tough,” O’Neill said. “I’m biased, of course, but Happy Jack is sneaky tough in there, I think. We’ll see. I’ll know tomorrow night, that’s for sure, if it was a good move.”