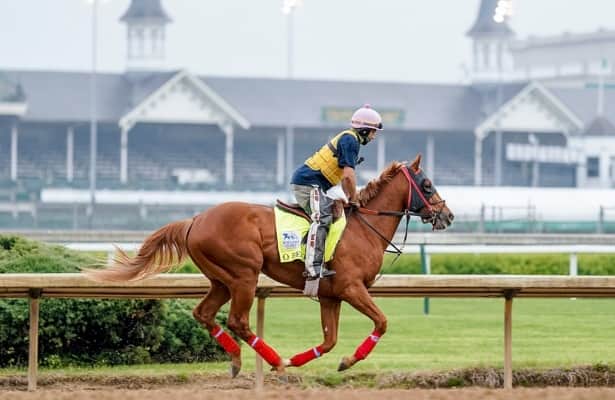 Trainer Greg Foley was pleased with O Besos' fifth-place finish in the Kentucky Derby as a 42-1 long shot. However, he thinks the best move now might be to seek class relief.

In a video interview with Jennie Rees, communications specialist with the Kentucky Horsemen's Benevolent and Protective Association, Foley said the son of Orb was a "little tired" after the Derby but otherwise came out of the race well.

"I thought he ran a good race. I thought (Marcelino) Pedroza rode him well," Foley said. "We got banged a little bit at the eighth pole the first time around. That kind of might have made him a little more aggressive, as far as up in the bit and going under the wire the first time. But he got him settled and relaxed, turning down the backside and was on the fence the whole way, really had a good trip after that.

"Top of the stretch...made a big move and got me a little excited there for a few seconds," Foley continued. "Thought we were going to get a big piece of it, for sure. I thought he flattened out a little bit last 50 yards, 75 yards, but still ran a good race. I'm proud of the horse."

Foley said the next move will be to "sit down and figure out what I want to do. … We're going to pick some races we can make some money with him. The Indiana Derby, Ohio Derby, stuff like that. Instead of 40-1, we might be 2-1."