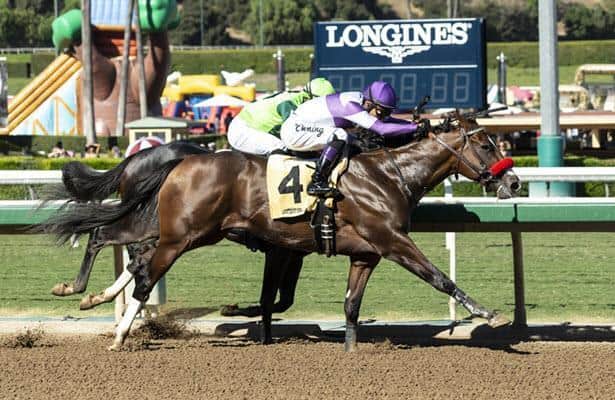 Add one colt to the prospective field for the 2020 Belmont Stakes. Trainer Doug O’Neill confirmed Tuesday evening that Fore Left, winner of the Feb. 6 UAE Two Thousand Guineas in his most recent start, will be entered in the $1 million Belmont and Eclipse Award-winning jockey Jose Ortiz has the ride.

O’Neill had originally planned to run Fore Left in the $250,000 Woody Stephens for 3-year-olds going seven furlongs, but cited several reasons for shifting to the 1 1/8-miles Belmont.

“Fore Left has settled in and is training really well over the Belmont surface,” O’Neill said. “He’s coming off a strong performance in Dubai. We really like the 1 1/8 -mile layout and the lack of a lot of speed projected in there. If we’re ever going to take a shot with him, he’s telling us that now is the time.

As outlined on Monday by Horse Racing Nation handicapper Reinier Macatangay, given the projected field, horses with early speed could be at an advantage in this year's Belmont Stakes.

The addition of Fore Left means 10 colts are expected to pass the entry box on Wednesday. Post positions are set to be drawn starting at noon Eastern and can be viewed live on the New York Racing Association Youtube channel.

O’Neill, a two-time Kentucky Derby-winning trainer, has started one horse in the Belmont: Blended Citizen, who finished ninth in 2018. O’Neill had a chance to sweep the Triple Crown in 2012 with I’ll Have Another, but the colt was injured the week of the race and had to be scratched. He never raced again.

O'Neill's other Kentucky Derby winner, Nyquist in 2016, skipped the Belmont after running third in the Preakness.

Owned by Reddam Racing, Fore Left sports a record of 9: 4-0-2 with earnings of $355,902. Last season, he made a trip to New York from O’Neill’s base at Santa Anita Park and won the Tremont Stakes at Belmont Park. The son of Twirling Candy would later add a second stakes win as a juvenile in the Sunny Slope at Santa Anita.