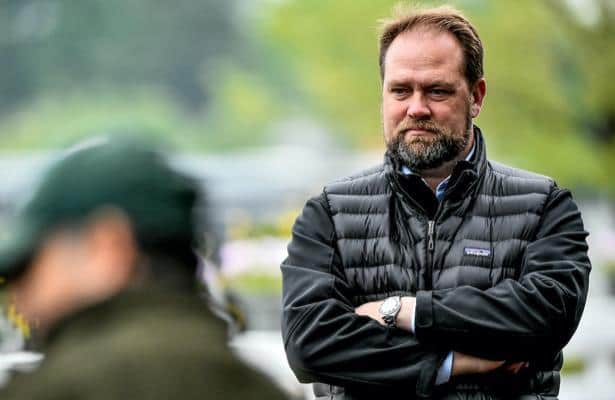 Bob Baffert has won all seven previous runnings of the Los Alamitos Futurity (G2) and once again looks formidable with the pair of Bob Hope (G3) winner Messier and Barossa, who exits the Breeders’ Cup Juvenile.

But if the embattled trainer is to maintain his stranglehold on the Futurity, which was moved to Los Alamitos in 2014 after decades at Hollywood Park, he will need to vanquish a pair of promising prospects from the Doug O’Neill barn.

[Related: Baffert's Messier leads a field of 5 in the Los Alamitos Futurity]

For Saturday's feature, O’Neill entered maiden winner Durante and Slow Down Andy, who won his bow at Santa Anita then came back to be a close second in last month’s Golden State Juvenile at Del Mar. O'Neill knows first-hand Baffert’s dominance in the Futurity, having run second in 2016 and again last year with The Great One behind winner Spielberg.

“We’re optimistic,” he said. “They’re doing well. With these young horses, you want to see them mature physically and mentally, and we feel like we’re heading the right way in both those categories.”

Durante will be taking a second crack at Barossa in the Futurity. In a maiden race at Santa Anita in mid-October, Durante had the lead in deep stretch before getting run down late by Barossa to lose by a half-length. Durante would come right back to graduate a month later going a mile on dirt at Del Mar.

O’Neill said it was soon after that effort the Futurity came on the radar for the son of Distorted Humor, who was a $130,000 auction purchase for owners Roadrunner Racing and William Strauss.

Durante, who drew post No. 3, will have regular rider Umberto Rispoli in the irons. He has two sharp drills since his maiden win, including a bullet five furlongs in 59 seconds at Santa Anita last Saturday.

“He’s still got some maturing to do, but he’s got the talent,” O’Neill said.

Slow Down Andy, a homebred for Reddam Racing, blitzed Cal-bred maidens by 4 3/4 lengths in his debut on Oct. 9. In the seven-furlong Golden State Juvenile, the son of Kentucky Derby winner Nyquist pressed the pace and surged to the lead inside the final furlong, but was run down by Grade 1-placed Finneus to lose by a half-length.

The Futurity will be Slow Down Andy’s first time racing around two turns.

“He’s a nice colt, I think that should not be a problem at all,” O’Neill said of the added distance.

Slow Down Andy also is eligible to run in Sunday’s $100,000 King Glorious Stakes for California-breds going a flat mile. O’Neill said it’s possible Slow Down Andy will be double entered, "but we entered the Futurity with the idea to run in the Futurity.”

The Los Alamitos Futurity is carded as the ninth race on a 10-race program. First post is scheduled for 3:30 pm. EST with the Futurity set to go off at approximately 6:58 p.m. EST.