O'Neill has 'three live chances' to battle Cistron in Daytona 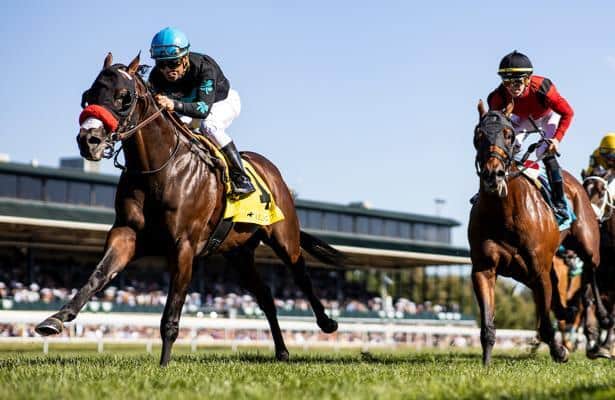 For a consistent Grade 1 winner with six wins, seven seconds, six thirds from 28 starts and earnings of more than three-quarters of a million dollars, Cistron has a lot of non-believers among bettors.

He has been favored only twice in those 28 races, although he could be the betting choice in Saturday’s contentious Grade 3, $100,000 Daytona Stakes at 5 ½ furlongs on turf.

However, that’s not stopping Doug O’Neill from triple-teaming Cistron, a son of The Factor who won the Kona Gold (G2), was second by a head in the Triple Bend (G2), and won the Bing Crosby (G1) and the San Simeon (G3) in his last four starts.

John Sadler trains Cistron for principal clients Kosta and Peter Hronis. A full horse at age six, primarily a sprinter, Cistron is adept on turf and dirt as victories in graded stakes on both surfaces attest.

O’Neill had six of the 17 horses nominated to the Daytona for 4-year-olds and up. He entered French-bred Murad Khan, Woodford (G2) winner Stubbins and Wildman Jack, the latter recently back from Dubai where he set a track record of 1:07.60 going six furlongs on a good turf course in the Nad Al Sheba Turf Sprint (G1) on March 7.

“Having three in the same race is the result of not running for a couple months,” O’Neill explained. “I have a lot of fresh horses ready to go and we’re blessed in the turf sprint category right now, so we’re excited.

“Wildman Jack won by nearly five lengths on the Meydan track in Dubai, so that was incredible. He really flourished over there and he continues to do well. He’s got a great post and new jockey in Hall of Famer Mike Smith. It’s a tough race but he’s got a big chance.

“If Stubbins had a clearer trip in the Breeders’ Cup and the race had been 5 ½ (furlongs) instead of five, he might have got all the money that day (instead of rallying from 10th entering the stretch and finishing fourth, beaten only three lengths). Credit to the McShanes (owner McShane Racing, LLC) for giving him time off.”

Stubbins, a four-year-old Morning Line colt, has not run since the Breeders’ Cup last Nov. 2 but has been working forwardly. He shows a bullet five furlong move in 1:02.20 at San Luis Rey on April 28.

"He’s come back really well, so we’re excited about him and looking forward to a great second half of the year,” O’Neill said.

Murad Khan is a seven-year-old gelding by Raven’s Pass out of the Sadler’s Wells dam Lady Elgar.

“He’s our seasoned veteran,” O’Neill said. “He’s long in the tooth but he’s back with Abel Cedillo who’s won on him before. He should be running down the lane.