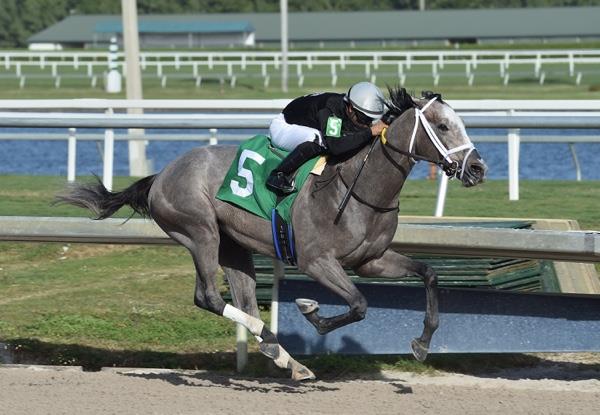 Ny Traffic exited his eighth-place finish in last Saturday’s Kentucky Derby (G1) with a cut in his left front ankle, but trainer Saffie Joseph Jr. has not ruled out the Oct. 3 Preakness Stakes (G1) as a possible next start for the son of Cross Traffic.

“We got a couple cuts. He has a staple in his ankle from a cut he got. It looks like he should be OK. Within 7 to 10 days we’ll decide,” Joseph said. “The main thing is the staple and when it gets taken out, how it’s going to be.”

Ny Traffic also lost right front shoe in the Derby, in which he showed early speed to chase pacesetter and eventual winner Authentic while racing five wide before tiring.

“Would I say he ran his best race? No,” Joseph said. “I don’t know when he lost his shoe. When you’re at that level, you need to have everything go right. He wasn’t the best horse in the race to begin with, so he can’t afford to give away advantages.”

Ny Traffic, who came within a nose of defeating victorious Authentic in the July 18 Haskell (G1) at Monmouth, won his first start for Joseph in a Jan. 11 optional claiming allowance at Gulfstream Park. The New York-bred colt earned his way to the Kentucky Derby with a third-place finish in the Risen Star (G2) and runner-up finish in the Louisiana Derby (G2) at Fair Grounds before falling just short of catching Authentic in the Haskell.

Tonalist’s Shape, a disappointing fifth as the favorite in the Charles Town Oaks (G3) last time out, is being considered for the Black-Eyed Susan (G2), which will be run on the Preakness undercard this year.

“She’s back in Florida now. We haven’t decided what to do with her yet,” Joseph said. “It’s possible she could run there.” Ny Traffic is a consensus 20-1 in foreign futures to win the Preakness.