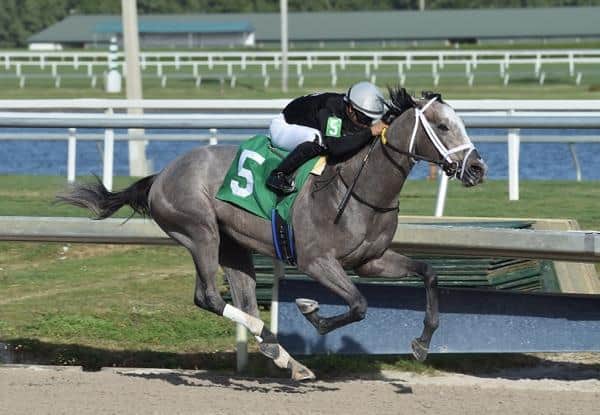 Ambitious young trainer Saffie Joseph Jr. exuded confidence as he prepared Ny Traffic to be his first Kentucky Derby starter. No one could have blamed him.

His gray colt had barely missed running down Authentic in the July 18 Haskell Stakes (G1) at Monmouth Park in a 1 1/8-mile contest that seemed to suggest the winner had distance limitations while the runner-up by a diminishing nose would handle the Derby’s 1 1/4 miles with relative ease.

Despite his meager $22,000 price as a private purchase for John Fanelli, Ny Traffic had been a model of consistency since arriving at Joseph’s Gulfstream Park barn for his 3-year-old campaign. After winning an allowance optional claiming race at Gulfstream in January, the New York-bred son of Cross Traffic had run third in the Risen Star (G2), second in the Louisiana Derby (G2) and second in the Matt Winn Stakes (G3) before his narrow Haskell miss.

Joseph, 33, who arrived in South Florida from his native Barbados with two horses in 2011, had every reason to believe the Derby would bring another strong performance.

“Going into the race, we thought he looked good and trained good, and we thought he would run well,” Joseph recalled. “He didn’t. But that’s horse racing, and you always keep moving forward.”

In this case, that means the Preakness Stakes on Saturday, the final leg of the pandemic-impacted Triple Crown. It has not been an easy step to take, though, for the trainer or a 3-year-old that had misfortune strike at the worst possible time before he faded to eighth in the Derby, 13 3/4 lengths behind unyielding front-runner Authentic.

Joseph said of his Preakness prospects, “I don’t feel as good as the Derby, but as trainers, we’re wrong 75 percent of the time, and we’re still considered good. So we’re going to give it another go.”

None of the 10 other Preakness starters was swept up in a race to make the race the way Ny Traffic was. He lost the shoe on his right front foot during the Derby and suffered a cut on his left front foot that was problematic.

“It wasn’t a huge cut. It was enough to get a couple of staples,” Joseph said. “But in the area it was in, we had to be very careful of infection. That was the main thing with the cut, to make sure it stayed clean all the time and was protected.”

According to Joseph, the cut is completely healed. That left the Preakness decision to hinge on how well Ny Traffic handled his lone work since the Derby this past Sunday at Churchill Downs and how well he exited the drill.

With rising star Tyler Gaffalione aboard, the youngster zipped four furlongs in 48 seconds flat, second of 88 at the distance.

“Tyler said he did everything perfect,” Fanelli said. “That made our decision whether we were going to run or not, what Tyler told us. We weren’t going to send a horse that wasn’t ready.”

Two-and-a-half hours before post positions were drawn Monday, Joseph still was unwilling to commit to running in the 1 3/16-mile test, saying he wanted to jog the colt and go over him one last time.

“If he didn’t give us a reason not to run, we were going to run,” he later explained. With most elite jockeys opting to remain at their home bases due to the pandemic, Joseph scrambled to secure local rider Horacio Karamanos.

“He worked well. He’s doing well. We figured it was worth the chance,” said Fanelli, hoping to overcome long odds once more with a $22,000 diamond in the rough.