Ny Traffic expected to go in Preakness; field at 12 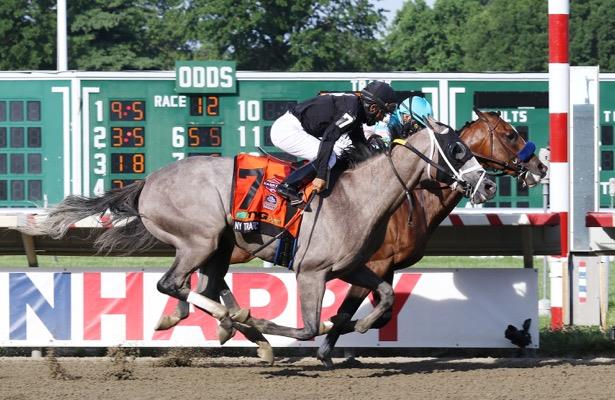 Trainer Saffie Joseph was apparently satisfied with Ny Traffic's four-furlong work in :48 flat Sunday at Churchill Downs, as following the drill he told Horse Racing Nation the plan is for the colt to run in Saturday's $1 million Preakness Stakes at Pimlico Race Course.

The addition of Ny Traffic -- which followed Saturday's confirmation by trainer Ken McPeek that star filly Swiss Skydiver would also be entered --  brings the projected Preakness field to 12. Entries for the Preakness, which this year serves as the final leg of the Triple Crown, will be taken Monday morning. The post position draw is set to begin at noon Eastern and will be streamed live at facebook.com/Preakness.

Ny Traffic exits an eighth-place finish in the Kentucky Derby. Sunday's drill -- which was the second-fastest of 88 at the distance -- was his first timed work since that effort.

"Worked well this morning, looks like we are going to the Preakness," Joseph said via text. "Finalize tomorrow."

He added a jockey still needed to be secured for Ny Traffic, who was ridden by Paco Lopez in the Kentucky Derby.

By Cross Traffic, Ny Traffic will enter the Preakness still in search of an elusive stakes win. After running third in the Risen Star (G3) this winter, he proceeded to be runner up in the Louisiana Derby (G2), Matt Winn Stakes (G3) and Haskell Stakes (G1), where he was beaten just a nose by eventual Kentucky Derby winner Authentic. He has a record of 10: 2-3-2 with earnings of $565,470.

*Rating is based on HRN fan votes, which rank the Top Active Horses in training.
Ny Traffic