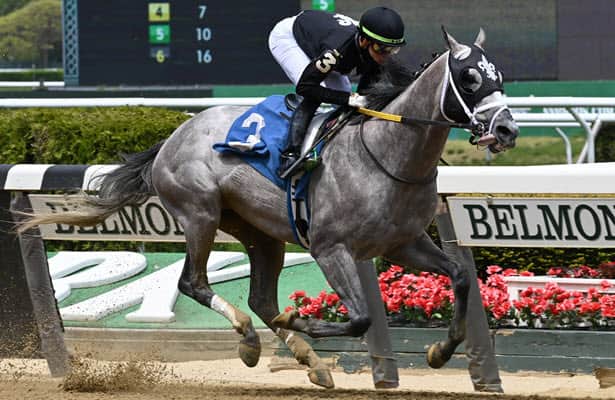 Ny Traffic, unraced since a disappointing ninth-place effort in last October's Preakness, returned in a big way on Sunday when crushing a field of New York-breds in a second-level allowance going seven furlongs.

Ny Traffic and Irad Ortiz Jr. were lapped on the outside of pacesetter Golani Brigade through solid fractions of 22.74 and 45.43 for the opening half mile. Ny Traffic poked a head in front near the quarter pole and opened up at the top of the stretch before being geared down late to cross the wire the easiest of winners. The final time on a fast track was a sharp 1:21.52.

"He was ready to run today," Ortiz Jr. said on America's Day at the Races. "I tried to break good out of there and he did...He relaxed so well...we went a little fast, but he was travelling so well, I didn't take a hold of him and I wasn't sending. I said alright, let's see what you got. And when I asked he surprised me."

NY TRAFFIC makes quite a return to the track in race 2 at #BelmontPark with @iradortiz up! pic.twitter.com/PmxtbEmr7x

Trained by Saffie Joseph Jr., Ny Traffic had been working bullets at Gulfstream Park prior to shipping to New York in the days before the race. The Cross Traffic colt, who last year hit the board in four graded stakes (Risen Star (G2), Louisiana Derby (G2), Matt Winn (G3) and Haskell (G1)), could now be a candidate for the $1 million Metropolitan Handicap (G1) going a mile at Belmont Park on the June 5 Belmont Stakes program.