Notes and quotes on all eight Pacific Classic 2018 contenders 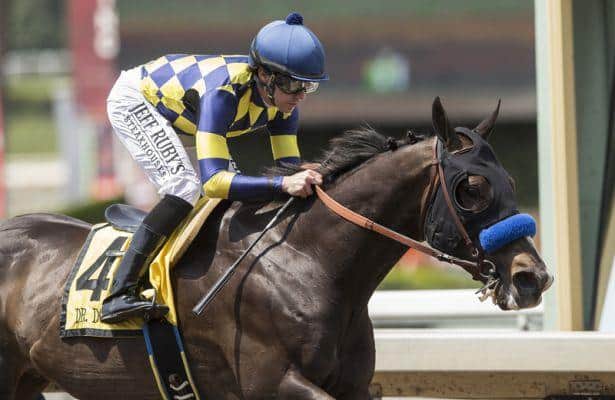 Accelerate will break from post position No. 5 in a field of eight in quest of completing the “California Triple” in Saturday’s Grade 1, $1 million TVG Pacific Classic.

Trained by John Sadler for Hronis Racing LLC, the 5-year-old son of Lookin At Lucky was established as the 8-5 morning line favorite by oddsmaker Russ Hudak by virtue of wins in the Santa Anita Handicap and Gold Cup at Santa Anita earlier this year.

A Pacific Classic win would put Accelerate with Lava Man (2006) and Game On Dude (2013) as horses to sweep the three major handicap division events in California in the same year.

A look at the Classic field in post position order:

1. The Lieutenant (Drayden Van Dyke, 6-1) – “I’m not concerned going a mile and a quarter from the one hole,” trainer Mike McCarthy said. “The horse is very tractable and we’ll go ahead and get a nice stalking trip.” The Lieutenant, a half brother to Triple Crown winner Justify, comes in off a runner-up finish in the Suburban Handicap at Belmont Park on July 7.

2. Dr. Dorr (Joe Talamo, 6-1) – Trainer Bob Baffert worked nominees Mubtaahij and Dr. Dorr on Monday and Tuesday, opting to go with the 5-year-old son of Lookin At Lucky owned by his wife, Jill. “Mubtaahij got a little tired and I had missed some training with him so I wasn’t comfortable with him going a mile and a quarter,” Baffert said. “Dr. Dorr actually worked really well (Tuesday) so I threw him in there. He drew a little bit inside, but that’s OK.” Dr. Dorr was second, beaten 6 ¾ lengths by Catalina Cruiser in the San Diego Handicap on July 21.

3. Prime Attraction (Kent Desormeaux, 8-1) – “Very happy with the draw,” trainer Jim Cassidy said. “I wanted to avoid the rail if we could and the three hole is good. It gives us options.” Prime Attraction achieved a 101 speed figure when third, beaten only a neck, in the Eddie Read Stakes on turf July 22.

4. Roman Rosso (Flavien Prat, 5-1) – Nothing like the signature event of the Del Mar summer season, and one of the biggest races of the thoroughbred year, for the U.S. debut of a South American standout. But that’s what Baffert has chosen for the Group I winner in Argentina and Uruguay whose last race was in March. “He has trained really well, but I don’t really know how he fits in,” Baffert said. “I know he’s won a lot of money ($547,546 from five wins in eight starts), so we’ll find out.”

5. Accelerate (Joel Rosario, 8-5) – Sadler chose to use stablemate Catalina Cruiser to win the San Diego and save Accelerate for the Classic. “I was happy to get the No. 5 post, but felt he could handle any (post) going a mile and a quarter,” Sadler said. “You’d rather be the favorite than not, and we’re excited going into the race.”

6. Beach View (Rafael Bejarano, 15-1) – “We’ve drawn to the outside, but hopefully going a mile and a quarter we won’t be outside for too long,” trainer Leonard Powell said. “Hopefully there will be good pace early on and we’ll be able to rate behind it and finish strong.” Beach View was switched from turf to dirt and won the 1 ½-mile Cougar II Handicap on July 25.

7. Pavel (Mario Gutierrez, 7-2) – “Seven of eight, not bad,” trainer Doug O’Neill said. “We were going into it not overly concerned where he drew, but he won from the outside (No. 9) in the Stephen Foster, so we kind of like him out there. We’re happy with the way he’s going and (although) it’s not big in numbers, it’s a pretty contentious race.”

8. Two Thirty Five (Franklin Ceballos, 20-1) – “Being outside doesn’t bother me," says trainer Richard Baltas. "You’ve got the length of the stretch, or maybe a little more, to the first turn. I thought he bounced (regressed) a little in the San Diego after running a big number the race before. You can’t win if you’re not in, so we entered and will take a look at the race and see what happens.”

The TVG Pacific Classic is a “Win and You’re In” qualifier for the $6 million Breeders’ Cup Classic in November at Churchill Downs.