Not all Medina Spirit; Preakness rivals are getting work done 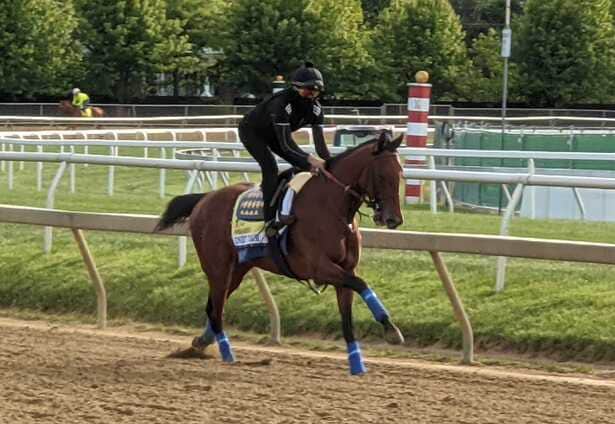 Medina Spirit was under the radar before he won the Kentucky Derby. Now that he has failed a drug test to put that victory in jeopardy, his Preakness Stakes rivals are the ones this week who find themselves in the background.

All 10 were on the track in the springtime chill Wednesday morning, mostly galloping in preparation for Saturday’s second jewel of what is already a checkered Triple Crown. With all the shippers in town, it was the first time that all were present and accounted for.

Although the news cycle continues to be dominated by Medina Spirit and Bob Baffert, other trainers were going about the usual business of pronouncing their horses to be looking good.

“I’m very confident because of who he is physically,” said Steve Asmussen, who brings Midnight Bourbon back from a troubled, sixth-place finish 11 days ago in the Derby. “His energy levels have been very high since the Derby. We would just want a different outcome. We just want him to have a chance to show his best side, so no excuses until necessary.”

Repeating the mantra that pace makes the race, Asmussen concurred that Concert Tour, the rested stablemate of Medina Spirit, is the most likely pacesetter Saturday if Baffert’s team decides to turn him loose from the outside post.

“Concert Tour is as fast as you can be,” Asmussen said. “He is obviously a formidable horse. It’ll be very interesting how the racetrack plays all week.”

Asmussen will not have Mike Smith riding Midnight Bourbon this time. The reins of the Lecomte Stakes (G3) winner will be taken by Irad Ortiz Jr. while Smith reunites with the Baffert barn to ride Concert Tour.

Medina Spirit is the 9-5 favorite, presuming he passes the pre-race drug screening that Baffert agreed to in a deal carved out Tuesday by attorneys representing him and the Maryland Jockey Club. The same test applies to Concert Tour and the filly Beautiful Gift, the 9-5 favorite in the Black-Eyed Susan (G2) on Friday. That is the day when results are expected back on the decisive drug tests.

With Baffert saying he will not come to Baltimore this year, assistant Jimmy Barnes has been looking after the horses and fielding questions from the media. He would not comment on the controversy swirling around his boss, confining his answers to questions about the horses themselves.

“Today we galloped them about a mile to a little under a mile-and-a-half,” Barnes said. “All three looked beautiful on the track. They go over the track very well. It looks like a really good surface here. We’re very happy with that.”

The most eventful trip onto the Pimlico dirt Wednesday came from the last of the Preakness horses to go out. France Go de Ina, the American-bred shipper from Japan that is a 20-1 long shot, had just finished his final breeze when rider Masaki Takano lost his grip on the left iron and fell to the track.

“Yeah, I’m OK,” he said when asked if he was all right. He was sporting a streak of dirt on the back of his red shirt. France Go de Ina did not take a bad step and was not hurt. After Takano fell, the Will Take Charge colt sported nothing more than the experience of a loose, calm jog to the clubhouse turn, where he turned around and was collected by an outrider.

“We won’t change anything that we do,” trainer Hideyuki Mori said through a translator.

Before the fall, France Go de Ina was credited with a 49.4-second breeze from the half-mile pole to the finish line, according to Equibase. Looking at video shot by Horse Racing Nation, workout analyst Bruno De Julio clocked it from the five-eighths pole with splits of 13.6, 26.4, 38.6, 51.2 and 1:03.8 under the wire, meaning 50.2 for the last half-mile.

“We have a good chance in the Preakness,” Mori said. “It’s a good fit, distance-wise, and pretty much everything leading up to this race says it will be a good race for him.”

France Go de Ina is expected to revert to his normal walk-gallop combination late Thursday morning. Other connections will stay the course of what they have been doing this week with the addition of some paddock and gate schooling.