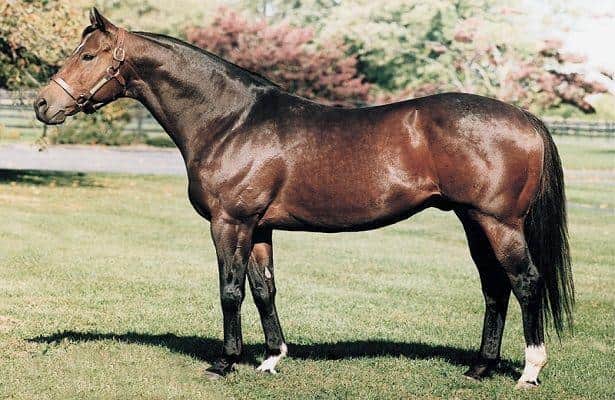 Introduced in 1986, the Jim McKay Maryland Million, a program of races restricted to the offspring of Maryland-based stallions, continues to receive strong support from Maryland's extensive breeding industry. Maryland-sired Thoroughbreds are nominated before they become 2-year-olds and remain eligible for life to run in the Maryland Million races.

After twenty-eight runnings, 222 stallions have sired runners in Maryland Million races. Saturday afternoon, twenty-six stallions will be represented in the nine stakes races at Laurel Park, including a pair of two stallions: Bullsbay and Street Magician.

Not For Love, who stands at Northview Stallion Station, leads all stallions with 16 potential runners tomorrow afternoon. Progeny of Not For Love have captured 28 Maryland Million races in the last 11 years from 192 starters, including four victories in 2009 and 2011. His sons and daughters could be competing in all nine stakes races.

Introduced in 1986, the Maryland Million, a program of races restricted to the offspring of Maryland-based stallions, has been duplicated by more than 20 other states.

Hall of Fame broadcaster Jim McKay originally proposed the concept and remained Chairman of the Board until his death six years ago. Twenty-two times attendance figures have topped 20,000 for the event.

“I love Maryland Million day,” Graham said. “Winning a race in New York is a big deal but winning here on Saturday is great because we get to do this in front of our friends.”

King Leatherbury and Dale Capuano sit atop the Maryland Million trainer standings with 10 victories each. Both have runners tomorrow.

“We have had good luck on Maryland Million day throughout the years,” Capuano said. “It is a big day and we always want to go out there and have something to run that is good enough to win.”

Maryland Jockey Club clerk of scales Frankie Saumell will have 38 riders in the jocks room Saturday.

“I am really excited. I do like a lot of my horses. It should be a fun day,” said McCarthy, who had three in the money finishes last year in his initial Maryland Million card. “I am really glad Ben’s Cat didn’t go into the Sprint. I think we are the horse to beat. I also really think the Pletcher horse (Bullheaded Boy) will be tough. Monster Sleeping is going to be really good stretching out. We just needed a little more distance in the Jameela (Stakes) where we got beat a neck going 6-furlongs. Another few strides and we could have won that race.”

Forest Boyce has the call in seven races, including 3-5 favorite Eighttofasttocatch in the Classic.

Ramon Dominguez holds the single year mark with five Maryland Million victories in 2005 and leads all riders with 17 winners, one more than Mario Pino and Edgar Prado.