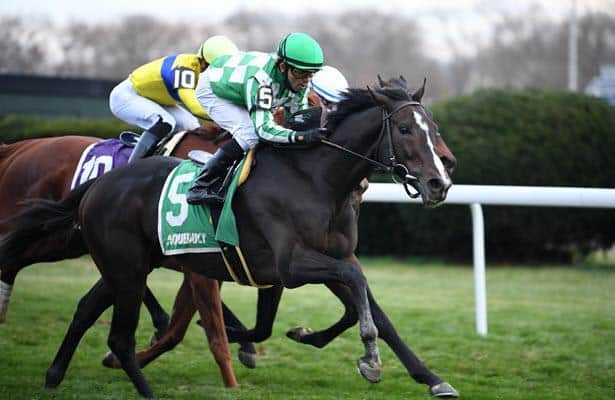 North Dakota, ridden by Jose Lezcano, mounted a furious rally in the stretch to get past Ziyad and claim victory in the $100,000 Red Smith (G3) at Aqueduct, going 1 3/8 miles on the turf.

Real Factor -- a 99-1 shot -- set the pace when breaking well and quickly opening up a huge lead on the rest of the field down the backstretch. With Ziyad sitting in a chasing position just behind for most of the 1 3/8-miles turf marathon, Real Factor had opened up a seven-length gap after the opening quarter mile and 10 lengths after the first half mile, a margin he would more or less maintain until entering the stretch.

In the drive for the wire, Real Factor tired and was caught by Ziyad, who took the lead briefly.

However, in the final furlong, North Dakota came rolling on the outside to collect a first stakes win for trainer Shug McGaughey. Ziyad checked in third and was followed by last year's Red Smith winner, veteran Grade 1 winner Sadler's Joy.

"[North Dakota] been up here from Fair Hill [training center] and he's been training really, really well,” said McGaughey, who earned a record fourth win in the Red Smith. “I thought he had a big chance today.”

"I tried to give him a clean trip the whole way and not lose any momentum," Lezcano said. "He progressed. Every pole was progress. As soon as he got to the three-eighths pole, he switched gears. I hit him a couple times and he really took off and went on with it and won the race.

"I think he's a very nice horse," Lezcano added. "He's kind of one paced, but the longer he can go, the better for him.”

A 4-year-old son of Medaglia d’Oro out of Starry Dreamer by Rubiano, North Dakota is a half brother to top stallion War Front. The colt is an Allen Stable homebred. He broke his maiden at Tampa Bay Downs in March and was exiting fourth-place finish when making his stakes debut in the Sycamore (G3) at Keeneland on Oct. 15.

Finishing ahead of him in the Sycamore were Red Smith rivals Red Knight, Postulation and Ziyad.

“When [North Dakota] broke his maiden at Tampa this year I didn't think he'd be winning a Grade 3 this fall," McGaughey said. "He's got the pedigree to do it and wants a distance of ground. Jose is a patient guy and I said just take your time with him and that's what he did and it worked out for him.
“I always felt that [a distance of ground] was what he wanted to do, but it was hard to find the right spot for him going far," McGaughey added.

After the race, McGaughey said North Dakota will be going to Florida for the winter on Sunday and will be back in 2021.

"We'll target some long races wherever that may be,” McGaughey said.