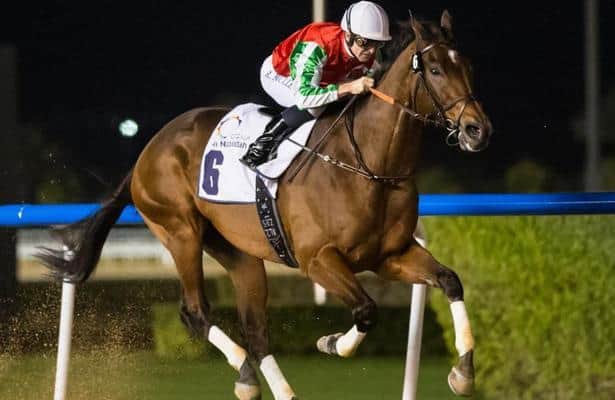 Thursday’s eight-race, $1.31 million Dubai World Cup Carnival card at Meydan Racecourse features the most exciting matchup of the UAE season thus far as well as the return of one of the top-rated turf horses in the world.

Two Group 2 affairs top the night, while the classic generation on both surfaces will get its chance to shine. A trio of super-competitive handicaps add depth to the night and the entirety of the meeting is sponsored by Longines.

It's the rematch so many have been awaiting, as Satish Seemar-trained defending champ North America clashes with course record holder Muntazah from the yard of Doug Watson. North America is unseen since finishing seventh in the $12 million Dubai World Cup (G1), while Muntazah bounced like a rubber ball in the Godolphin Mile (G2) after scorching the track record in Super Saturday’s Burj Nahaar (G3). North America is rated 118, second-highest of any dirt horse in Dubai, while Muntazah is 116. Even more intriguing in this octet of competitors is that Muntazah drew the rail under Jim Crowley and Richie Mullen must break from the outside post eight on North America. Both appear to do their best running while freewheeling on the pace.

Kimbear, also from the Watson yard, won the 2018 Burj Nahaar (G3) and his conditioner believes he is sitting on a big race now that his troublesome feet are back in order. UAE’s leading trainer also believes that improving campaigner Thegreatcollection is due a little luck and has been progressive enough to be owed a shot in this spot. Pat Dobbs has the mount on the former, while Sam Hitchcott takes the reins on the latter.

Secret Ambition, a G3 winner and last-out victor over Kimbear and Thegreatcollection in the Dubai Creek Mile, is once again a bit overlooked under Tadhg O’Shea and could prove to be the form horse on the strength of recent showings. Finishing in proximity to him last out was Ahmad bin Harmash-trained Rodaini, who has a seasoning edge over all in what is his fourth start since October under Connor Beasley.

Heavy Metal, at age 10, is bordering legendary in Dubai and appears to be hoping to give it one more shot this season for Salem bin Ghadayer. Last of seven in the Dubai Creek Mile, he defied his age last March when nearly defending his title in the Godolphin Mile (G2), pipped in the final strides by Coal Front. The son of Exceed and Excel won this race over Thunder Snow, with North America in third, in 2018. The early pace will definitely be interesting, as the confirmed frontrunner drew barrier three; two outside Muntazah and five inside North America.

Completing the field is Godolphin’s Team Talk, who is unraced since finishing last in the Dubai Gold Cup sponsored by Al Tayer Motors (G2) over 3200m on turf. This will be his first start on dirt since taking up the caboose in the Al Maktoum Challenge R3 (G1) two years ago.

The past two winners of this race have plenty in common — both are trained by Saeed bin Suroor and owned by Godolphin — but that is as close as Benbatl and Dream Castle appear to come on paper for many analysts. Benbatl towers above his stablemate on rating, carrying one of the top in the world at 125. Dream Castle, a 112, is looking to return to form after a slump Down Under and must improve markedly in order to best his friendly Al Quoz acquaintance, who also has a distinct tactical speed advantage in this sextet. It does not help that regular pilot Christophe Soumillon has jumped ship and landed on 2018 Dubai Turf (G1) winner Benbatl.

Others of note in the race are definitely overshadowed by the leading two, but are not without all chance. After all, it is indeed horse racing and trainer Mike de Kock, who saddles Majestic Mambo, has won numerous group-level turf events in Dubai. Eighth in last season’s Dubai Turf astern Almond Eye, he spent the summer acclimating to Dubai in the Green Stables of Erwan Charpy and arguably could be a better horse this DWC Carnival. How good will be the question, obviously.

Saeed bin Suroor comes heavy-handed in the first step toward the UAE Derby, led by super-impressive Exceed and Excel colt First View, who is bred along the same cross as UAE fan favorites Secret Ambition, Helmet (sire of Thunder Snow) and Belgian Bill. Soumillon chose this one over well-intended Laser Show (Kevin Stott) and Lost in Time (Pat Cosgrave).

The all-year locals should not be dismissed in this mile test, including those with a course and distance victory such as Commanding, who wears the in-form colors of Nasir Askar for trainer Satish Seemar. Ali Rashid Al Rayhi starts a pair of local winners, including Commanding’s first-out conqueror Al Modayar and sharp mile winner Dubai Avenue. The latter won his only local start in a quicker 1600m time than Commanding a fortnight prior and defeated next-out victor Good Fighter, as well as Far Sky, who is expected to run well in this spot for Doug Watson.

Scandinavia’s top 3-year-old Nocentsinkentucky, bred in his namesake and a grandson of America’s top sire of 2019, Into Mischief, has been nothing short of dominant in Sweden for Francisco Castro. Still, he has yet to be tested and has not been tried beyond 1200m.

A full field of 16 will run, with well-regarded Watson trainee Sanad Libya on the outside (17) looking in, hopeful for a defection.

Turf sophomores clash in what appears to be a very blue race. Not sad, but flush with Godolphin royal hues when Bin Suroor-conditioned Platinum Star, second in the Windsor Castle at Royal Ascot, clashes with Charlie Appleby-trained filly Chasing Dreams, who is undefeated in two starts and appears one for the classics if her speedy pedigree stretches out.

Appleby goes three-deep in here with blue-blooded filly Silent Wave, a daughter of War Front and Secret Gesture, as well as Story of Light, who has attracted the services of second rider James Doyle. William Buick will be on Chasing Dreams and Brett Doyle aboard the former. Bin Suroor also starts maiden Colour Image with Kevin Stott aboard.