None Above The Law rides rail to win Del Mar Derby 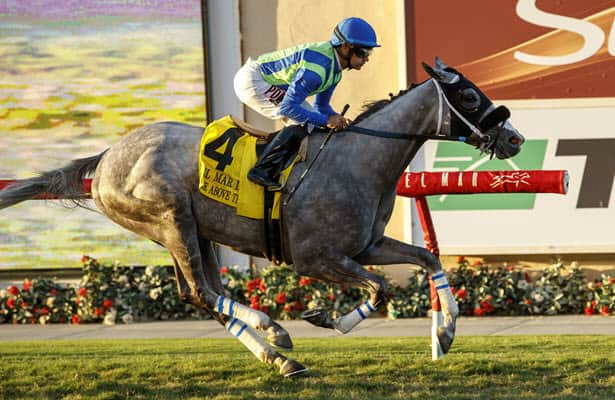 None Above The Law and Joe Bravo found a seam along the rail in the final furlong and surged to victory in the $250,000 Del Mar Derby (G2) on Saturday.

Dispatched at 8-1, None Above The Law raced in mid-pack while saving ground as Hockey Dad and Crew Dragon led the 13 sophomores for their 1 1/8-miles journey on the Jimmy Durante turf course. As the tempo quickened on the second turn, None Above The Law was shuffled back momentarily, but when the rail opened he shot past a line of three horses to earn his first graded stakes win.

"We just saved all we could and I showed him daylight turning for home," Bravo said. "He really got up under me."

Hudson Ridge and Flavien Prat, bet down to 9-5 favoritism for Bob Baffert off a 9-2 morning line, checked in ninth.

The winning time out of the angular Del Mar infield chute was 1:48.97.

This was the first stakes win in the Del Mar Derby for both Bravo and Miller. The jockey is riding his first full season at Del Mar. Miller is en route to winning his eighth conditioning title at the shore oval.

Downstream Racing's None Above The Law was ninth, beaten three lengths in the one-mile Oceanside on turf on opening day at Del Mar. He came back to blitz Cal-breds by 5 1/4 lengths when going seven furlongs in the Real Good Deal Stakes on dirt July 30. He also won the off-the-turf Silky Sullivan Stakes for state-breds at Golden Gate this spring and followed with a win in the Alcatraz Stakes in Northern California going one mile on the grass.

None Above The Law is out of the Northern Afleet mare Legally Blanca. He was bred by longtime California operators Kirk and Judy Robison.

“I know he went from a mile on turf to seven-furlongs on the dirt to a mile and an eighth on the turf to win this. You won’t find that in any training manual, that’s not the way you do it," Miller said. "But this horse just does everything well. He’s just an overachiever and I just love this horse. The Robinsons are longtime clients and what a ride by Joe Bravo.”

The stakes win was the fourth of the meet for Bravo.

“Peter told me this horse can do anything," Bravo said. "He wins running seven eighths on the dirt; he wins going a mile and one-eighth on the grass."