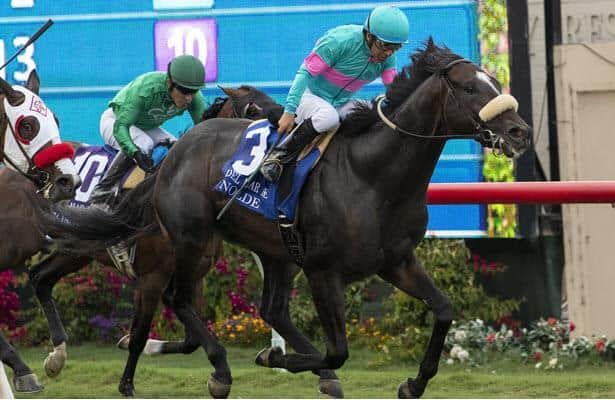 With Victor Espinoza aboard, Nolde saved ground while racing near the back of the nine-horse field as Kingly set fractions of :23.44, 47.80 and 1:11.63 for six furlongs. Nolde commenced his bid entering the stretch and then threaded the needle between Kingly and Neptune's Storm, the one-two finishers in last month's La Jolla Handicap (G3), to win in a swift final time of 1:46.98 for 1 1/8-miles.

"I just had to be patient with him and let him run," said Espinoza, who was also aboard Nolde in the Oceanside. "He's a long horse, so he can cover a lot of ground. When they opened it up a little bit [in the stretch], that was my chance to let him run. I had to be more patient than [in the Oceanside]. Last time I moved just a little bit early and that's how he got beat."

Trained by John Shirreffs, Nolde broke his maiden and beat allowance company in consecutive starts at Santa Anita earlier this year before a gut-wrenching loss by a nose in the July 17 Oceanside Stakes on opening day of the Del Mar meet. Shirreffs elected to skip the La Jolla with the son of Pioneerof the Nile, instead electing to have a fresh horse for Del Mar's main event for 3-year-old turfers.

“The Oceanside prepared him nicely for this, which was the plan," Shirreffs said. "We were very happy with the way the horse trained for the race. Victor (Espinoza) has ridden him a number of times and really knows the horse. He got him settled in a nice position and Nolde has a really nice turn of foot. We’re happy to have him (Espinoza) ride our horses. He’s a great rider.”

Nolde lost the first four starts of his career, all on dirt, before switching to the turf and being a prompt winner at Santa Anita in May. He improved to 3-for-4 since being switched to the sod and gaining the services of  the Hall of Famer Espinoza.

This was the 100th stakes win at Del Mar for Espinoza. It was also the first stakes win of the meet for Shirreffs, and the second Del Mar Derby (Madeo, 2008) for the long-time team of Moss and Sherriffs.