No final ruling in Baffert lawsuit, urine will be tested 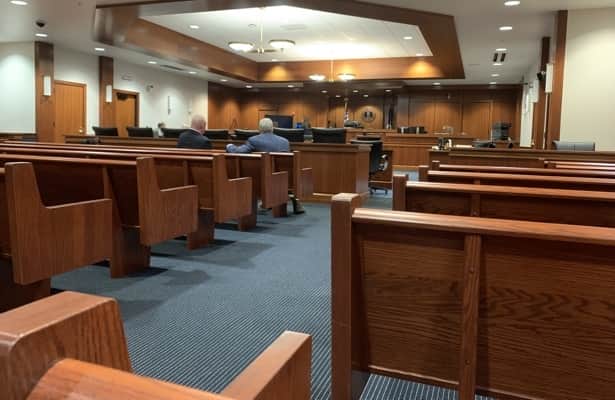 Photo: Matt Stahl
Frankfort, Ky.
Franklin Circuit Court judge Thomas Wingate did not issue a final ruling at Friday’s hearing as the Kentucky Horse Racing Commission and attorneys for Zedan Racing Stables and Bob Baffert argued as to what quantity of Medina Spirit’s urine sample should be sent to a lab for further testing.

Craig Robertson, representing Baffert, argued the entire sample, somewhere between 25 and 27 milliliters, should be sent, with the lab determining how much it needs. Jennifer Wolsing, representing the KHRC, instead was seeking to send off 2 ml, which the commission said should be all the lab needs.

“I don’t think they ought to have to give you all of it,” Wingate said at the beginning of the hearing.

The parties agreed upon a delivery method for getting the urine to the lab in New York, where representatives from each side would travel with the sample. They also agreed that the division of the sample would happen once it reached its final destination and was thawed.

Wingate suggested holding back at least 3 ml for the commission to keep, which Wolsing said was necessary in case it is needed in the future. Wolsing objected to keeping the smaller amount.

“We’re trying to retain as much as possible for unknown possible future testing,” Wolsing said. “There’s a specific amount that they need.”

Robertson stressed throughout the hearing that both parties should trust the mutually agreed upon laboratory. The Baffert and Zedan coalition are seeking to prove that Medina Spirit’s post-Kentucky Derby drug test failure for Betamethasone was the result of a skin cream as opposed to an injection, which they claim makes a difference in the case.

“We believe it can be completely exonerating in this case,” Robertson said. “The rules of the Kentucky Horse Racing Commission are clear… proving that this was an ointment and that it came from an ointment and not an injection is, at a bare minimum, a mitigating circumstance.”

Wolsing did not take a position as to whether the betamethasone came from a cream or an injection would make a difference.

Medina Spirit’s blood has already been split-sample tested, which confirmed the betamethasone positive. When the remnants were sent for further testing, in order to try and determine the origin of the drug, a plasma tube burst during shipping, which Robertson said caused Baffert and Zedan’s representation to seek testing of the “pristine” urine sample.”

Wingate said he will not issue a final order until Wednesday, giving the parties time to work out a solution amongst themselves.

Baffert has been suspended for two years by Churchill Downs and indefinitely by New York. The KHRC has made no ruling as to whether Medina Spirit will be disqualified from the Derby win.

After the hearing, Clark Brewster, who represented Zedan in the case, defended Baffert’s use of the skin ointment.

“I’m surprised the commission and the stewards didn’t have their arm around us saying, ‘let’s get more information to make a correct decision,’ instead of fighting us or trying to prevent this information,” Brewster said.

As Baffert suspension ends, is Monmouth among his targets?
The last day of Hall of Fame trainer Bob Baffert's...

Speaker’s Corner, Life Is Good will duel Saturday at Belmont
A change of plans has ignited a potential rivalry...

Dr. Schivel has yet to bounce back from his Mideast journey
Severe jet lag is threatening to compromise Dr. Sc...