Tiz the Law keeps NY-bred program in the spotlight 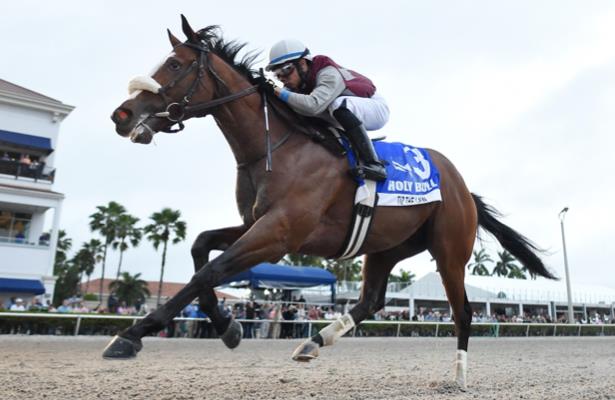 When the gelding Funny Cide pulled an upset in the 2003 Kentucky Derby, it represented a groundbreaking triumph for New York’s breeding program. New York-breds were not expected to venture to major races in the Bluegrass State, let alone bring home the roses.

Funny Cide not only accomplished what was then unthinkable, he reiterated his quality with a commanding Preakness victory before finishing third in the Belmont Stakes for Sackatoga Stable. The modest ownership group, which traces its roots to a backyard barbeque in upstate New York, had purchased him privately for $75,000 as a 2-year-old.

When Tiz the Law, a $110,000 Sackatoga purchase, completed unfinished business for managing partner Jack Knowlton in the recent Belmont, it did not send shockwaves throughout the industry. The 1 1/8-mile opening leg of this year’s Triple Crown made a very different statement about breeding in the Empire State.

“When Funny Cide was on that scale, on that platform, he was somewhat of an anomaly. It was very different back then,” said Jeffrey Cannizzo, executive director of New York Thoroughbred Breeders Inc. “It’s no anomaly anymore. This is the reality of New York breeding, and we are seeing the results of people taking part in our program and increasing the quality and performance of our horses.”

Dayatthespa captured the 2014 Breeders’ Cup Filly & Mare Turf. Effinex shipped to Churchill Downs in 2015 and returned to his Belmont Park base with the Clark Handicap spoils. Mind Your Biscuits, the richest New York-bred in history, with $4,159,286 in earnings, gained international acclaim with a blistering performance in the 2017 Dubai Golden Shaheen.

Audible’s rousing Florida Derby victory led to a solid third place in the 2018 Kentucky Derby. Later that season, Diversify rewarded trainer Rick Violette’s long-term commitment to New York’s program with a wire-to-wire tour de force in the 2018 Whitney. It was the victory of a lifetime for Violette, who succumbed to lung cancer a couple of months later.

New York’s Thoroughbred breeding program was developed in 1973 to encourage the establishment of farms and to protect and expand green space. New York-breds earned more than $93 million in purses last year, with about $69.9 million of that at New York State tracks. Breeders, owners and stallion owners collected $15,468,436 in awards.

Strides made since Funny Cide’s breakthrough have been dramatic. “If you were to look at the evolution of New York breeding from Funny Cide forward, when Funny Cide won the Derby in 2003, New York-breds were not a household name. It was more or less a Mom and Pop program,” Cannizzo said.

Despite those impressive numbers, Joe Appelbaum, president of the New York Thoroughbred Horsemen’s Association, attaches great importance to the emergence of Tiz the Law. Bred by Twin Creeks Farm, the son of Constitution is widely regarded as the pre-eminent 3-year-old at this stage of the season

“Let’s be honest, in this game where ‘What have you done for me lately?’ should be the tag word, Funny Cide is a distant memory,” Appelbaum said.

Tiz the Law hit the national scene with a four-length score in the Champagne Stakes (G1) last October. He has earned $1,480,300 in sweeping five of six starts, including 3 for 3 this year.

State-breds have become an essential element of New York racing. “It’s critically important,” Appelbaum said. The New York Racing Association “wouldn’t be able to run races if it didn’t have the ballast of the New York breeding program. There just wouldn’t be enough racehorses here.”

Then there is the economic impact.

“Statewide, you’re talking about tens of thousands of jobs,” Appelbaum said. “It’s the second-largest agri-business in the state. It’s involved in every single one of the 99 counties.”

For all of the good news concerning New York’s program, it is unclear whether Tiz the Law’s standing at the head of his class will enhance the value of New York-breds at this year’s sales.

“Our bloodstock market is in a position like the rest of the industry right now,” Cannizzo said. “There is a lot of uncertainty because of COVID-19, the state of unemployment and the economics of our country. There is a lot of unknown when it comes to buying and selling any type of commodity.”