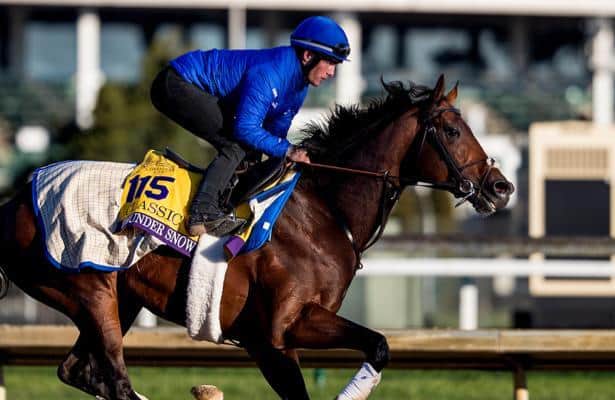 Thunder Snow, who in his last visit to the United States scratched the morning of the Aug. 3 Whitney Stakes (G1) with an elevated fever, won't be back this season -- but he may return next year.

Trainer Saeed bin Suroor told ITV presenter Matt Chapman the two-time Dubai World Cup (G1) winner is no longer a candidate for the stated year-end goal, the Breeders' Cup Classic. But the conditioner added that he'd like to bring Thunder Snow, a 5-year-old son of Helmet, to the racetrack in 2020.

The Godolphin homebred, after all, could pick up more major checks, perhaps of the like that would make him the highest earner of all time given that in addition to the World Cup in his backyard, there's the new $20 million Saudi Cup a month prior now on the racing calendar.

Thunder Snow raced most recently in the Metropolitan Handicap (G1), finishing third behind Mitole and McKinzie, both of whom could go favored in their respective Breeders' Cup races and vie for Eclipse Award championships.

But the absence of Thunder Snow is another blow to the Nov. 2 Breeders' Cup Classic field, as in recent days a bout of colic put Maximum Security's chances of making the race at risk, and Catholic Boy has dealt with his own series of setbacks.

The Jockey Club Gold Cup is expected to include 3-year-olds Code of Honor and Tacitus, 1-2 in the Travers Stakes (G1). McKinzie headlines the Awesome Again.

Thunder Snow was ranked second in this week's Breeders' Cup Classic Rankings behind McKinzie with Code of Honor, Woodward (G1) winner Preservationist and Maximum Security others in the Top 5.

Thunder Snow made history this year as both the first two-time and back-to-back winner of the Dubai World Cup. Next year, should he return, the horse would seek the first three-time winning designation of any World Cup night race.