Why no Preakness? Maximum Security exited Derby with cuts 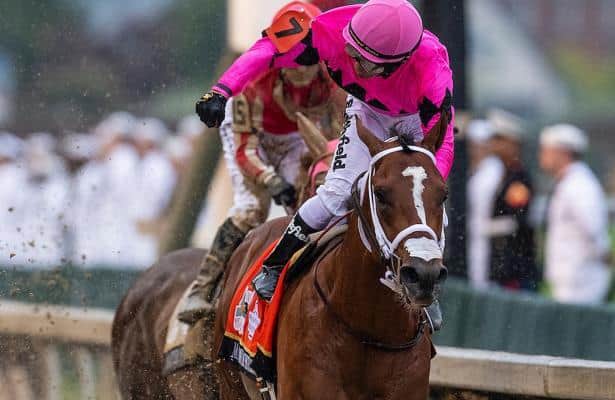 While news broke Tuesday that Country House will miss the Preakness Stakes due to a developing cough, it’s unlikely a Triple Crown would be on the line even if stewards had left Maximum Security atop the finishing order.

Ben Glass, racing manager for owners Gary and Mary West, said Maximum Security exited the Derby with abrasions on his hind legs, the reason connections haven’t thought further about entering the son of New Year’s Day in the May 18 race at Pimlico.

“If he’s not cut up in the hind legs, we probably would have gone to the Preakness,” Glass said.

After Maximum Security arrived Tuesday to Monmouth Park, trainer Jason Servis had a professional photographer document the wounds. A state vet also signed an affidavit confirming they were fresh from the race.

“This is why Jason said we can’t go — because he’s got abrasions and swollen a little bit,” Glass added. “Mr. West and I, we were leaning toward the Preakness if we got this overturned. We were going to go for the Triple Crown.”

Yes, overturned, as there is still hope by connections they could one day be declared the Kentucky Derby winner. Glass said the nature of the abrasions support their belief that the colt veered out near the 5/16ths pole due to contact from behind by War of Will, and that Maximum Security shouldn’t bear the responsibility of impeding his rivals.

The Kentucky Horse Racing Commission quickly shot down request for an appeal filed by West through Lexington, Ky., attorney Barry Stilz. All stewards’ decisions, according to state statutes, are final.

“We knew they’d turn down the appeal because that’s their law,” Glass said.

That means Glass will not travel later this week to Kentucky as originally planned to review film of the race with stewards and KHRC officials. Rather, West has turned his attention to filing a lawsuit in federal court.

Maximum Security’s connections are unsure whether stewards had available NBC footage of the Derby that shows close quarters racing with War of Will.

“The video is right on target,” Glass said. “We’re trying to get the raw footage.”

Tuesday, Servis also indicated a potential issue inconsistency with the stewards’ ruling. He phoned their booth within five minutes of the decision going final.

Later, in a statement to media, chief steward Barbara Borden said there were two riders objections lodged, the other from Jon Court, who rode Long Range Toddy. Stewards dropped Maximum Security to 17th, one spot behind Long Range Toddy.

“One of them I could see getting it wrong, but three on the speaker told me there was one claim of foul,” Servis said. “I’m adamant that’s the truth.”

Once back in training, Maximum Security could point to Monmouth Park’s signature race, the July 20 Haskell Invitational (G1). Looking back at the Derby, “He was the best horse in the race,” Servis said. “He’s 5-for-5 — might be a great horse.”

Apple Blossom odds & analysis: A battle of champions
On Saturday at Oaklawn Park, champions will clash...