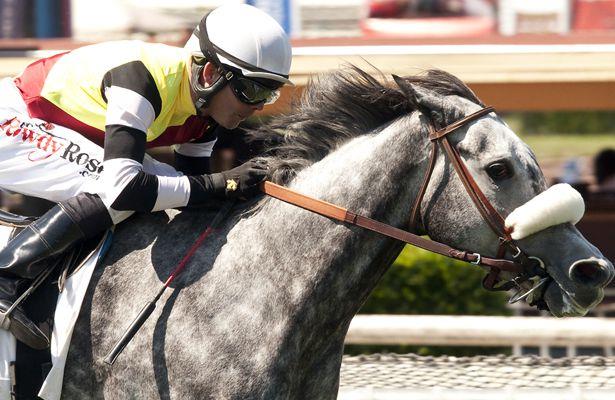 With no clear cut standout, Uruguayan-bred mare Gaga A looms the horse to beat in Sunday’s Grade II, $200,000 San Luis Rey Stakes at Santa Anita.  With a field of 12 older horses, including 4-year-old filly, Havanna Belle engaged to contest a mile and one half on turf, the San Luis Rey will be run for the 65th time.

GAGA A:  Bred in Uruguay, this venerable 7-year-old mare comes off her best stateside effort, a close second in the Grade II, 1 ¼ miles San Marcos Stakes versus males.  Trained by Neil Drysdale, she rallied from off the pace and fought back gamely late, only to be beaten three quarters of a length by deep closer Flamboyant.  Owned by her breeder, Haras Phillipson, Gaga A will be making her fifth start for Drysdale on Sunday.  With a win from two starts at 1 ½ miles on turf, Gaga A has five wins from 32 overall tries.

GOING SOMEWHERE:  Brazilian-bred, this 7-year-old horse will be reunited with Mike Smith, who rode him to a close second two starts back in the Grade III, 1 ¾ miles San Juan Capistrano Stakes on June 28, 2015.  Well beaten in the Grade III, 1 ½ miles turf John B. Connally Stakes at Sam Houston Park Jan. 30, Going Somewhere, who is also conditioned by Drysdale, should improve by many lengths with a recent race under his belt.  Also owned and bred by Haras Phillipson, Inc., Going Somewhere is 9-2-1-2 at a mile and a half on turf and has three wins from 24 overall starts.  He’ll be making his fourth stateside start on Sunday.

BIG JOHN B:  Yet another 7-year-old, this Florida-bred gelding by Hard Spun comes off a third place finish in the Grade III John B. Connally Stakes.  A dedicated deep closer, “Big John,” who will be making his 39thcareer start, has a win, a second and a third from five tries at a mile and a half on turf.  With two wins from six starts over the Santa Anita turf, he has 14 overall wins.

HAVANNA BELLE:  A fresh face at age four, this Irish-bred filly pressed the pace and went on to a convincing 2 ¼ length win here in the 1 ½ miles turf Astra Stakes versus older fillies and mares on Jan 17.  Although she has faced her own kind in eight stateside starts, Havanna Belle, who is conditioned by Phil D’Amato, prevailed in an open field of 15 in her native Ireland in August, 2014.  She has two wins from five starts over the Santa Anita turf and is three for 14 overall.